Following the FIRE project’s first edition of national conferences held in Glasgow in September, Sport and Citizenship and its project partners headed over to Bucharest in December 2019 for the second national conference, focusing on the local social inclusion of refugees, migrants and asylum-seekers through football, and co-organised with Romanian Football Federation.

The FIRE (Football Including REfugees) project seeks to facilitate access to sport and especially football to a target group that would benefit greatly from some fresh air and physical activity, new encounters and socialising, having fun and making new friendships. Romania now has a growing interest for social inclusion initiatives, which is depicted through some of its ongoing grassroots projects. 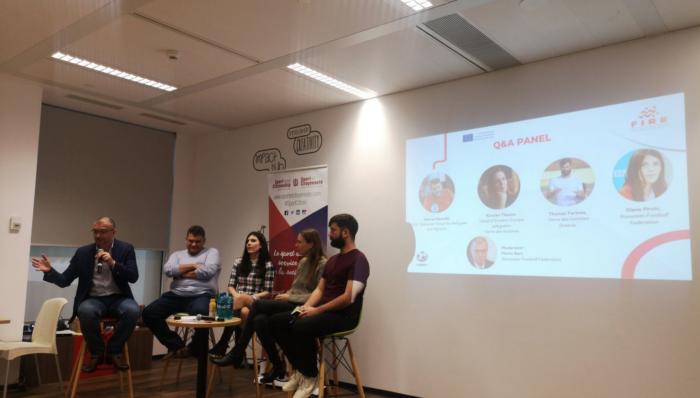 ARCA (Romania Forum for Refugees and Migrants), a local NGO, organised for the first time in Romania a football tournament dedicated to refugees and local football players to break the barriers through some competitive fun. While the organisation and smooth running of the event was challenging, their successful partnership with the Romanian Football Federation (RFF) was promising and will most likely lead to many more inclusive events in the future, shared Razvan Samoila, ARCA President.

The conference took place on December 12, 2019 in Bucharest and aimed to showcase good practices and examples of projects and initiatives while also gathering present and future stakeholders in order to boost local partnerships and alliances. The event was attended by a variety of different Romanian organisations and entities who thus learned about some essential tips and tricks when creating and implementing a social inclusion project, had the opportunity to network with a diversity of actors and directly exchange with the programme’s experts. 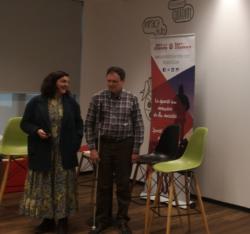 Dragones de Lavapiès, a local community-driven NGO of Madrid was present in the capacity of good practice. Represented by Jorge Balonas and Dolores Galindo, Dragones is extremely active in offering the local communities a variety of sport, cultural and social activities in order to help foster social cohesion in one of Madrid’s most diverse neighbourhoods. As one of the four selected pilot interventions for the FIRE project, last Fall Dragones delivered the MNA Festival, a multi-day event which included games and workshops for the younger participants to discover team spirit and cultural diversity, a visit to the National Museum of Anthropology where the trophy was produced by the 3D printer following the children’s choice, a football tournament gathering over 180 participants from a variety of different groups, an Urban Festival with inclusive sport, graffiti and a concert by Afrojuice, and finally a closing event with special visitors from war-torn regions who symbolically planted an Olive tree.

The floor was then given to the Q&A Panel with broad scope of experts that included: Kirsten Theuns, Head of Eastern Europe delegation, Terre des Hommes; Thomas Farines, Terre des Hommes Hellas; Răzvan Samoilă ARCA and Diana Pirciu Project manager, RFF. The discussions were moderated by Florin Sari, CSR and Good Governance, RFF. Discussion shed light not only on the details of each speaker’s groundwork, but further on advice of common mistakes to avoid and tips to foster successful initiatives. For a more detailed overview of the conference, the minutes are available here.

The third edition of the FIRE project’s national conferences will be held in Brussels early April 2020, and will be co-organised with the Royal Belgian Football Federation. Dates, programme and registration will be released in due time- stay tuned!