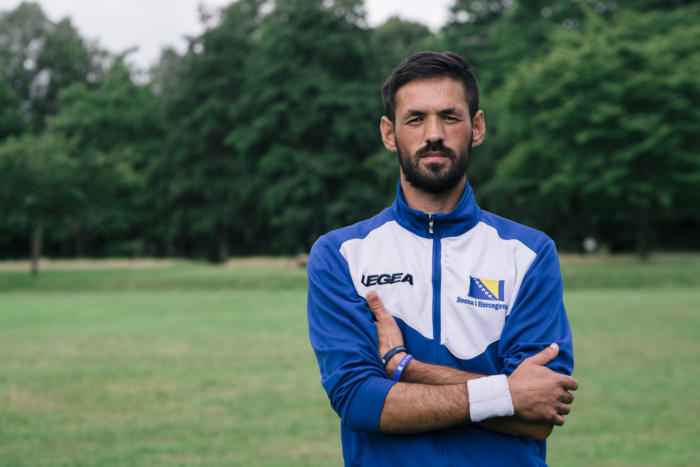 The homeless World Cup Foundation‘s mission is to help people experiencing homelessness and maginalisation change their lives for the better.

With the support of UEFA one of the organisation’s biggest partners, the Homeless World Cup Foundation works through a network of 73 Street Football Partners around the globe. Every year, the Homeless World Cup Foundation organises an inspiring week-long street football tournament, bringing together 64 teams from 50+ countries running a men’s and a women’s competition in parallel. What makes this event unique, is that every single player has experienced homelessness and marginalisation. The 2019 event took place in Cardiff, Wales.

Among the 500 players this year was Fahrudin Muminovic who was his village’s sole male survivor during the Srebrenica massacre and even gave evidence at the Hague. Hoping to write a whole new chapter in his incredible story, he represented Bosnia and Herzgnovia at the 2019 Homeless World Cup in Cardiff.

“To write your own future”

Muminovic was just seven years old when he watched his father be killed alongside more than 150 people from his village in the massacre in 1995. Hidden behind a screen to protect his identity, he gave evidence against those responsible at the International Court in the Hague, sending many of them to prison for life.

“For most of my life, I’ve lived in refugee camps, basically as homeless” said the 31 year-old. “At the moment, I live with my aunt, uncle and younger sister. But thanks to donations and the organisation International Forum of Solidarity (FIS), they are building me a house.”

Despite almost two decades living as a protected witness, Muminovic is proud his identity is no longer a secret. “Most of my testimony was given anonymously, but a few years ago my story became public, and I am proud to say I was that boy who survived. A few years ago I was still forbidden to speak openly about it, so I’m very proud to be able to be here and tell the story of what happened to me, my family, and my country.”

Left an orphan following his father’s murder and mother’s death just weeks after giving birth to his younger sister, Muminovic turned to football. “When I’m at home, it’s very tough because it’s remote village. But when I’m playing football with my mates or at this tournament, I feel like I’m part of something bigger. One of my greatest wishes in life has been to represent my country in something, so it’s a great honor to wear the flag on my chest. Having the chance to represent my country in football is almost as important to me as having a house. In the future, I want to be able to tell a happier story of my life. I will never, ever forget my past or what has happened, but I want to write my own future rather than be defined by the atrocities of the past”.

The next Homeless World Cup will take place in Tampere, Finland in June 2020.