Today Data is vitally important to elite clubs and teams, both in individual sports and in team sports. It helps to monitor and capture insights into the sports we love.

High technology is now a central point. Cameras, sensors and wearables record every aspect of player performances while managers and players use Data to improve training, performances or nutrition levels and even fan interaction in the constant search for better performance.

And a common position was developed by those speakers; through examples they developed in which ways Data became useful in Sport those last years.

First of all, in every elite teams, clubs, people worked on Datas. They collect and analyze information furnished by the different technological supports. They use it in different ways, collectively or individually. The use that is in fact must be the most efficient possible. Thus, in collective sports, these collected data are analyzed both with regard to the collective but also with regard to the individual practice of sport. Through this analysis, we can see the strengths and weaknesses of the collective but also of each player, allowing to define if a particular player will be performing in a given match and by extension, this type of use also have repercussions on the choice of coaches. In some sports, such as cycling or Formula 1, the use of data is extremely present. 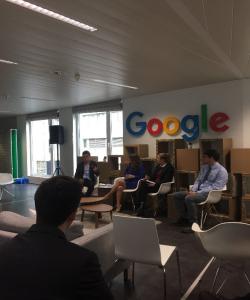 The final subject mentioned was about how data can be collected. Different angles are needed to make data totally efficient. The new technologies will play an important role in the next years. If the drones were mentioned, it is clear that a lot of processes in development will gain importance to collect, analyze and properly use data  While the use of data has a definite interest, it is nevertheless true that certain questions deserve to be asked. Thus, questions about the potential of young athletes, questions about genetics (DNA sequences, predispositions …) or questions related to finance were brought. It is true that the collection and use of Datas can be a source of drift if just and regulated use is not made.

At a time when data is gaining more and more importance in sport, it is worth considering and anticipating how digital and technological progress can impact the future development of sport.