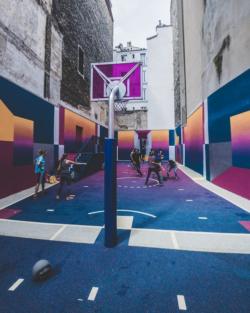 Some welcome words by Yves Le Lostecque (Head of Sport Unit at the Commission) reminded just how essential gender equality is to the EU, as a fundamental legal principal but also a political one. The topic is a priority concern for the Union, as women will enrich fields such as that of sport, by bringing other attitudes and perspectives to the table.

Before giving the floor to the speakers, MEP Rozière touched upon the ongoing paradox of sport- both an area perpetuating gender violence and stereotypes while it also possesses the potential to be a tool of physical and mental empowerment.  Retired professional football player, Nadine Kessler, echoed such ideas by sharing how the game has strengthened her, on many levels. Presently an advisor to UEFA’s women’s football, Ms Kessler walked the room through UEFA’s work from created opportunities to providing role models for women and girls.

Head of Women’s football at the FFF (Fédération Française de Football), Frédérique Jossinet offered detailed insight into the progress and milestones achieved by French football feminisation initiatives– as a retired judoka herself, Ms Jossinet enjoys the challenge of transforming football into a gender-friendly sport (on all different aspects), an environment in which she evolved in judo.

General Manager Women’s Rugby (World Rugby) Katie Sadleir shared encouraging insight into the sustainable changes she is implementing for the sport, of which one of the most important ones is enabling women to access leadership positions- as of such, she has enabled the Executive Board to be held at 35% by women.

Executive Board Member of ISF, Cristina Branzoi presented their project “She runs” to boost young girls’ confidence and ambitions for which an open event will be held in Paris, early March 2019. In parallel, Katharina Althoff and Hannes Teetz presented the very successful German-launched project “Kicking Girls”, which has now been adopted in several other countries. The concept grew from the observation that girls from disadvantaged backgrounds were the least present in sport, thus setting out to provide them with local, voluntary-based, football activities and tournament.

The second roundtable on safe sport started with retired-gymnast Gloria Viseras’ testimony about sexual abuse and power games in sport, stressing the importance of protecting children and child-athletes. Dr Tine Vertommen then presented some of the main findings from her research regarding abuse in sport. And finally, to wrap up the session boxer Stacey Copeland explained how gender alone has prevented her from entering a number of world-class competitions and has been at the source of much social pressure for practicing “boys’ sports”.