On December 10 2020, the Royal Belgian Football Association (RBFA) and Sport and Citizenship Think tank co-organised the third national conference of the FIRE project, that was originally to be hosted in Brussels in April 2020. FIRE is dedicated to promoting and facilitating local social inclusion of refugees, migrants, and asylum-seekers through football. The webinar mainly gathered Belgian stakeholders from grassroots football and civil society. 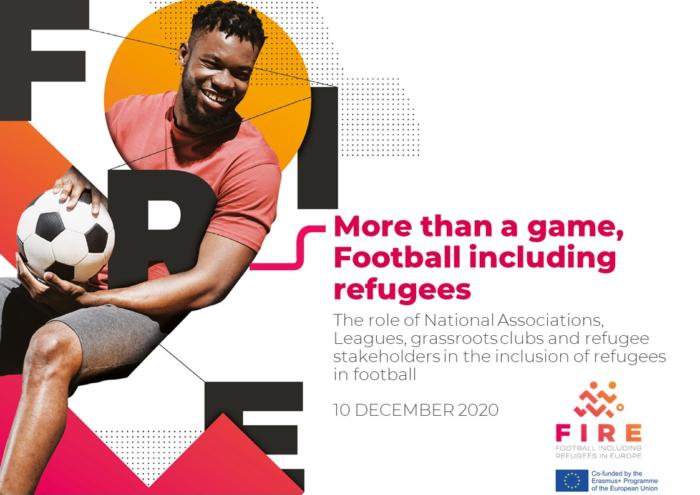 Due to COVID-19, the event did not take place in the headquarters of the RBFA, but instead was organized completely o nline. The RBFA and Sport and Citizenship, hosted a variety of stakeholders in football and from social organizations. This transnational network meeting focused on the role of National Associations, Leagues, grassroots clubs, and refugees’ stakeholders to facilitate social inclusion in football.

The conference started with an introduction by Many Leroy (Marketing and Communication Director, RBFA) and an opening word by Sammy Mahdi (State Secretary for Asylum and Migration, Federal Government of Belgium). ‘Football is one of the important topics, it doesn’t solve global problems like poverty or climate change, but it has the power to unite people.’

Secondly, Kiera Wason-Milne (FIRE Project Manager and Head of EU Affairs,  Sport and Citizenship) presented the philosophy, objectives, and activities of the FIRE project. After that, Niels Van Muijden (Head of Programs, Fare Network) shared his experience through Fare Network‘s activities and campaigns, and the support they offer to encourage grassroots approach to including refugees through football. Last but not least, host and speaker, Hedeli Sassi (Football & Social Responsibility Coordinator, RBFA) outlined the RBFAs refugee project called ‘ . Hedeli stressed that ‘You have to ensure that projects are embedded into the structure of your club or organization. So that if the responsible persons leave, the project doesn’t fall apart.’

The second part of the conference divided the participants into two workshops. The first workshop discussed the topic of “Social inclusion of refugees as football players” which showcased two examples of good practice by Belgian clubs, from the perspective of both a professional and an amateur football club. From a professional club, we had input from Arne Knaepen (Community Officer, OH Leuven) and Yusuf Farah (OCMW, social services in the city of Leuven). From experience, the latter explained that ‘Sometimes it’s already difficult to push eleven players from the same village in the right direction. Imagine being a team of eleven players from all over the world.’ The amateur club level was presented by Julien Moré (Royal Anhée and social worker, Red Cross Yvoir). The first workshop was moderated by Chaimae El Massaoul, member of the RBFA Youth Council .

The second workshop deep dived into the “Social inclusion of refugees as volunteers or co-workers in a club”. From a professional club perspective, we had input from Jeremy Lubert (Security Officer, RBFA) and Xavier Ali (social worker, Fedasil) on their project ‘Everyone on the pitch’ and the inclusion of refugees as stewards at Football Club Seraing United. Speaking for a grassroots club, we had a presentation from Carlo Cervillieri (Event coordinator, football club RAAL La Louvière) and Amandine Warlop (s ocial worker, Fedasil), who shared how ‘It’s amazing how fast we found out that football can be a wonderful tool for people to meet’. The second workshop was moderated by Lamine Doumbouya, also a member of the RBFA Youth Council.

“It’s amazing how fast we found out that football can be a wonderful tool for people to meet” Amandine Warlop- co-worker, Fedasil (Reception Centre for asylum-seekers and refugees, Belgium)

Pr. Albrecht Sonntag (ESSCA School of Management) concluded the webinar with insightful reflections on what had been said and discussed during the programme, notably highlighting that ‘Successful inclusion is a two-way street. You have those that want to include others and those that want to be included’.

At the end of the conference, participants received a lot of valuable input from all the different speakers which could be summarized by the following takeaways: