Is the table wide enough? 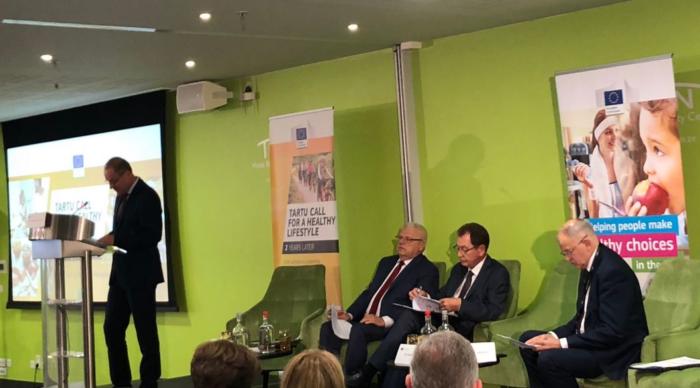 On 19 June 2019 in Brussels, the European Commission convened a seminar on the Tartu Call for a Healthy lifestyle. The call, adopted in 2017 by three EU Commissioners (Navracsics, Hogan and Andriukaitis) was meant to be an attempt at working in partnership across different policy sectors. A step forward which had been pushed for by a large proportion of the sport and physical activity sector in the last years, including our own think tank.

So, 2 years later, where are we? Has this call led to any ground-breaking decisions? Most importantly, has it brought about progress to the issues of physical inactivity and health inequality?

Listening to Commissioner Andriukaitis felt like deja-vu : “Health is a transversal matter that should penetrate all policy areas. It is a priority political matter. Using structural funds, promoting education programmes and campaign should be an goal for everyone”.

Since 2017, undeniable progress can be observed for the sport and physical activity sector: increased funding within Erasmus+ and a growing European Week of Sport to only cite two of the main developments. If anchoring Erasmus+ Sport in the EU budget seems like a given, one should recognised the importance of perennial and increasing funding streams for the sector.

But if political impetus is undeniably there, physical activity levels continue to stagnate or even decrease.

2 years ago, the signature of the call was accompanied by a set of 15 commitments. Among these, commitment number 7 is probably central. It reads “Pursuing co-operation among relevant Commission services to coordinate actions to promote healthy lifestyles and related funding”. As mentioned earlier in this article, cross-sector collaboration is key.

Early in 2019, the Commission announced the creation of a new inter-service group on the promotion of healthy lifestyles. So far, civil society organisations have been kept outside those meetings.

But most importantly, other Directorate Generals of the Commission are still awaiting the invitation it seems. DG MOVE would undeniably be a relevant fourth pillar to this holistic strategy. Safe and active urban environments are key to making sure current and future generations get quality physical activity opportunities. Environment, regional development, research and innovation are also key sectors to reach out to.

One can only hope that the table is wide enough to welcome more players.