Every year, Peace and Sport mobilizes the sport world as well as governments and civil society to celebrate the International Day of Sport for Development and Peace on April 6.

It also keeps record of all activities hosted by other organizations and individuals in celebration of IDSDP through an online platform www.april6.org. In 2019, 1,150 initiatives were registered in 136 countries. To help encourage and support actions aimed at promoting IDSDP, April6.org provides toolkits including planning guides, checklists, and brochures about peace through sport and highlight best practices.

“This year, we encourage everyone to mobilize digitally by using one’s creativity,” announced Joël Bouzou, President and Founder of Peace and Sport. “Webinars, photo contests, online tournaments, and #WhiteCard photos are all initiatives that anyone can set up locally. The most important thing is to celebrate this international day and to recall the positive role of sport for development and peace.” 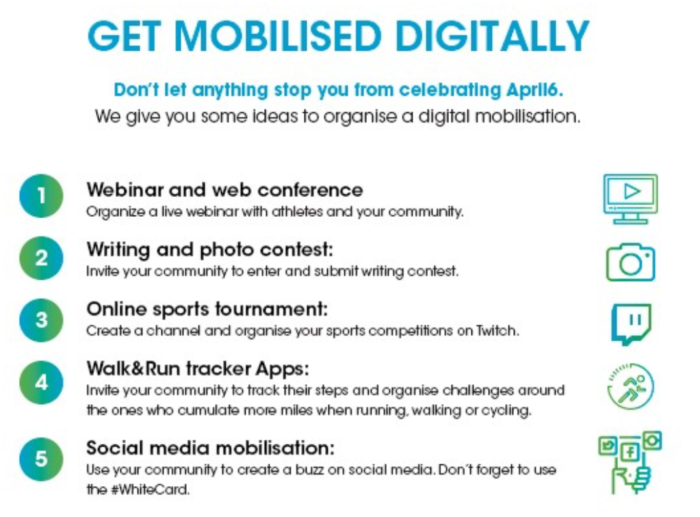 Since 2016, Peace and Sport rewards the best April6 initiative. The April6 Initiative of the Year represents an important means of acknowledging the contributions of individuals and organizations promoting IDSDP. Last year, the Venezuelan organization Deporte para el Desarrollo received the “April6 Initiative of the Year” Award for the first “Learn, Play and Try” Festival. The festival brought together young beneficiaries through the positive values of rugby.

One of the biggest initiatives for IDSDP, is Peace and Sport’s annual #WhiteCard digital campaign which encourages people to take photos while holding a white card in symbolization of their commitment for peace through sport, and to share them online using the hashtag ‘#WhiteCard’. As a reference to the yellow and the red card in the sporting world, the #WhiteCard invites not to punish but to create positive real change. This year the campaign will be launched by the end of March and will focus on the theme “Behind each #WhiteCard, there is a story”. It will highlight the stories of individuals who have been positively impacted by sport. 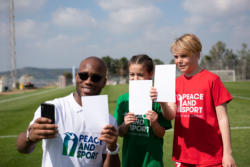 In the past, many emblematic personalities have participated in the #WhiteCard campaign such as Didier Drogba, football legend and Vice-President of Peace and Sport, Champion for PEace and former French Sports Minister Laura Flessel, Champion for Peace and Olympic sprinting champion Yohan Blake, H.E. Mr. Iván Duque, President of the Republic of Colombia, the President of the International Paralympic Committee Andrew Parsons… Thanks to this strong mobilization, the #WhiteCard digital campaign reached 98 million people on social networks in 2019.