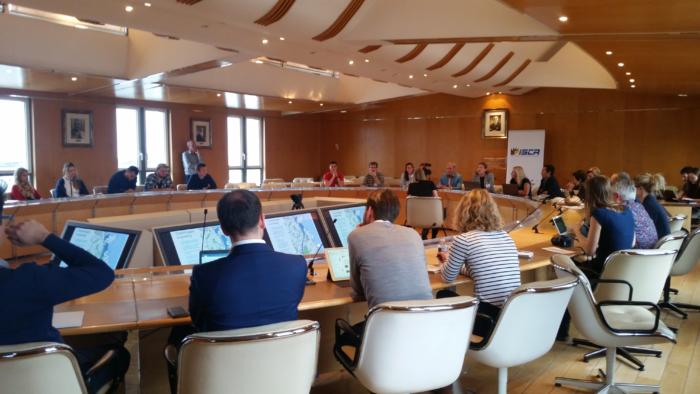 The second edition of ISCA’s Moving People- Moving Europe conference took place in Paris, at the CNOSF on November 23rd, and welcomed over 150 representatives of 88 organisations, from over 30 different countries.

The first part of the day provided insight into a variety of perspectives on the promotion of physical activity, from both national and international perspectives. Arnaud Jean (UFOLEP President) and Denis Masseglia (President of the French Olympic Committee- CNOSF) welcomed all participants by in turn touching on the sporting opportunity the 2024 Games represent for France for the latter, and by recalling the foundation of ISCA and the worldwide network it is today for the former. A panel discussion with all speakers of the plenary session concluded the morning activities. The plenary included further insight into current French topics such as the delivery of Paris 2024’s grassroots sport legacy (Damien Combredet- Head of Legacy, Paris delegation to Major Sporting Events) and facilitating access to sport practices for everyone (François Bechieau- Secretary General, Movement of Progressists), while Jane Ashworth (CEO, Streetgames) discussed the growing void between rich and poor in the UK, which inherently creates health inequalities. All the way from Seattle, Michael Shiosaki (Director of Planning and Development, Seattle Parks and Recreation) demonstrated how the city facilitates and encourages inhabitants to be more active and express their wishes as to what kind of open-air public spaces they desire most.

More global perspectives were offered by Mogens Kirkeby (President, ISCA) who retraced the story of the Human Right to Move upon its 10th Anniversary, and finally Lea Nash Castro (Technical Consultant, WHO Europe) presented the context and ambitions of WHO’s Global Action Plan on Physical Activity.

Participants then had the possibility to follow one of the three afternoon workshops, each based around a European project. Perfecting effective advocacy was proposed in the ActiveVoice workshop, empowerment and leadership skills were debated in UsGirls, and MOVEment Spaces was the opportunity for participants to learn more about the winners of the MOVEment Spaces Awards.

The prizes were formally awarded to the 3 winners in the evening, following an expert panel’s decision, with a prize for Green Spaces, Blue Spaces, and Black Spaces. All awards focused on  initiatives that transformed urban spaces into active spaces- and an additional People’s Choice award was also put forward.