Accueil » Sport and Citizenship at the Official Opening Ceremony of the European Week of Sport
categories: 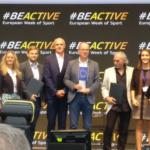 The 22nd of September, the European Commission invited Sport and Citizenship think tank to the Opening Ceremony of the EWoS 2018.

The 22nd of September, the European Commission invited Sport and Citizenship think tank to the Opening Ceremony of the European Week of Sport (EWoS) in Vienna’s Prater Park which kicked off eight days in which Europeans are encouraged to #BeActive.

European Commissioner for Education, Culture, Youth and Sport, Tibor Navracsics, welcomed the delegates to the official opening ceremony and stressed once more the importance of EWoS to help raise awareness of the risks related to inactivity and with the aim to “promote sport and physical activity across Europe”. He was followed on stage by Heinz-Christian Strache, Vice-Chancellor of Austria, Heinz K. Becker, MEP, Janez Kocijancic, European Olympic Committees and Gábor Balogh, President Hungarian School Sport Federation.

Heinz K. Becker called for a “change of paradigm in Europe” to fully integrate sport in EU policies. The ceremony ended with the signature of the new partners of the EWoS, including Made to play–Nike which was a partner of Sport and Citizenship think tank during a conference on active kids in Brussels, on the 28th of September, within the framework of EWoS 2018.