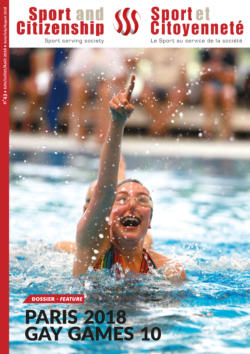 In this revue you will find various personal accounts and contributions on the subject of diversity in sport, from an introduction to the Gay Games 10, to the defence of equal rights of access to doing sport, via a discussion of the concept of sport as a means to liberation. We are pleased to include articles from various representatives of sport, academia, the authorities and voluntary bodies in this number.

These discussions continued during a series of conferences organised by our Think Tank and Paris 2018 ahead of the Gay Games launch (1-3 August 2018). Questions of health, accessibility and combating discrimination were debated by numerous personalities in order to come up with 18 propositions aimed at making progress together on these issues.

We would like to express our very warm thanks to all the Paris 2018 teams for their confidence in us and for making us part of the reflections on this subject, which is so very important for our societies and democracies.

Point of you of the European Parliament

« A cultural change is needed to limit racism »

Cécile Kyenge, MEP and co-president of the European Parliament Anti-Racism and Diversity Intergroup

Michael O’Flaherty, Director of the EU Agency for Fundamental Rights

“The Gay Games has always stood for equality”

“we need to be aware of the effect of words”

“Diversity and inclusion: two values essential to our group”

Gay Games: paying together and being yourself

Stéphane Héas, Lecturer in STAPS and sociology, University of Rennes 2. Member of the VIPS² research laboratory

Sport open to all

Toward a more inclusive sport for LGBTI+ people

The conditions for emancipation through sport

To build a broad anti-discrimination movement

Outsport: a match for inclusion 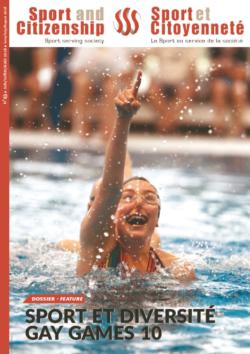