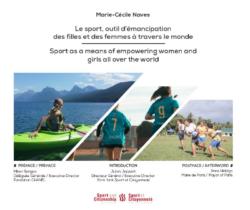 As access to rights and ressources is denied to women and girls all over the world, this book brings to light eleven examples where they have been empowered through or by doing sport, in such a way that seeks to encourage them to take their full place in society and to fight structural gender discrimination and inequalities.

By learning about such positive experiences, we can build international cooperation schemes in favor of equality. Although they are being deliberately gender-consicous, there is no paradox in the fact that the schemes have a universal aim.

As for Major International Sports Events (MISE), they must accelerate liberating social changes and measure their sustainable legacy.

Written by Marie-Cécile Naves, PhD in Political Science and Director of Studies of the Think tank Sport and Citizenship, with the support of CHANEL foundation.

Preface by Miren Bengoa, Delegate General for the Fondation Chanel

Introduction by Julian Jappert, Director General of the Sport and Citizenship Think Tank

Chapter I: The Global Sports Mentoring Program and the example of “Girl Power” (Egypt): From the home to the court

Chapter 2: “On the Move” (Canada): Education and Access to Leadership for All

Chapter 5: “Fight for Dignity” (DRC): Resilience after rape as an act of war

Chapter 6: “Get into Rugby Plus” (Oceania): Combating violence against women and girls

Chapter 7: “Emancipatory physical and sporting education for all” (Palestine):

Learning together in spite of occupation

Chapter 9: “One Win Leads to Another” (Brazil): The Power of Emulation

Chapter 11: “Magic Bus” (India): Getting out of poverty