Founded in 1999, the Fare network is an umbrella organisation that brings together individuals and organisations that tackle discrimination in football and use football as a vehicle to promote social inclusion, diversity and equality.

Our objectives are to fight discrimination and bring about processes of inclusion through football. We aim to do this based on the principle that football, as the most popular sport in the world, belongs to everyone and can be used as a tool to further drive cohesion by bridging differences in society and strengthening common aspirations and values.

An important aspect of our work is to recognise the power of football to help contribute to the inclusion of asylum seekers and refugees. Football brings people of different cultures and backgrounds together, and it belongs to us all, regardless of our differences. We believe that there is a role to play for both national football associations and grassroots organisations and the FIRE project is an opportunity for these organisations to collaborate actively around concrete deliverables. 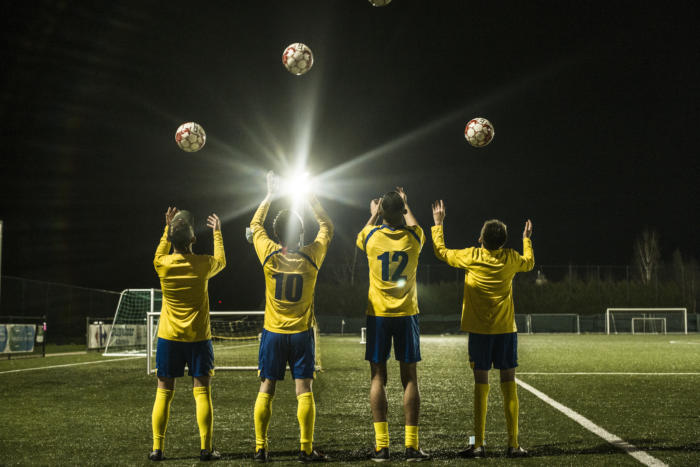 The FIRE project has helped establish an interesting mix of grassroots organisations, national football associations, a think tank and a higher education institution. Through the project, a 2-year initiative financed by the Erasmus+ programme, we want to see football as a sport able to demonstrate and further encourage inclusion, participation, socialisation and access to sport for asylum-seekers, refugees and migrants on a local level.

Following the extensive political and media coverage of increased migratory flows across Europe, FIRE seeks to contribute to the involvement of newcomers through football. The Fare network decided to join because it allows us to share our expertise with others. We already have extensive experience in implementing and organising activities around the inclusion of refugees, either through the partnerships in various Erasmus+ programmes, or through supporting grassroots organisations that are working with refugees – especially in funding activities during our annual, widely known #FootballPeople weeks campaign. The Fare network also set up a database that includes an overview of grassroots and professional football clubs, offering various playing activities for refugees.

Within FIRE, our main responsibility has been to develop a methodological approach precisely for grassroots organisations that want to engage in organising activities and events to promote the inclusion of refugees, asylum seekers and migrants.

This approach was tested and implemented in practice through the organisation of four pilot schemes in Belgium, Romania, Scotland and Spain. The application process for grassroots organisations planning to create an event were then embedded into the Fare #FootballPeople weeks activities.

The #FootballPeople weeks are designed with the aim of uniting stakeholders, clubs, players, minority groups and communities affected by discrimination in order to promote equality and inclusion. During the two-week period we have more than 150,000 individuals from over 60 countries involved in organising and participating in events and activities to bring about social change and take a joint stand against all forms of discrimination and racism.

Through the four pilot schemes organised during the #FootballPeople weeks, the FIRE project has reached over 1000 participants of which 34% were refugees. The organisations involved also established cooperation between grassroots groups and respective national football associations. For example in Romania, ARCA (Romanian Forum for Migrants and Refugees) and the Romanian Football Federation have developed a long-term partnership after the pilot intervention and are working together in other projects. Another great example of establishing partnerships could be seen in the activities organised by Dragones de Lavapiés, a Madrid-based neighbourhood initiative and community club that has grown into a well-established grassroots organisation. As part of their FIRE event Dragones de Lavapiés partnered with the National Museum of Anthropology in organising several workshops to discover different values applicable to team play and cultural diversity.

Finally, the events have also enabled us to provide feedback on the needs, capacities and experience of grassroots organisations – valuable feedback used to inspire others.

What’s next for FIRE?

What the Fare network appreciated about FIRE was the focus on the encouragement and empowerment of grassroots actors willing to engage with refugees and other minority groups. With our accumulated experience, we were able to contribute to the needs assessment, which represented the first deliverable[1] and the basis of the joint work on the open online course (MOOC FIRE) in terms of target competences and know-how. Now that the MOOC is online, we aim to disseminate it among our grassroots community across the continent and build upon the achievements and results of the project.

The Fare network is therefore happy to be also involved in the follow up project called FIRE+ that will showcase a mix of existing and new partners who will be working with us on the important topic of inclusion for refugees.

This means we can build upon the tangible outcomes of the first FIRE project and take them further with a specific new focus on female refugees and unaccompanied minors. We aim to inspire as many coaches, youth workers, informal educators, grassroots and professional clubs as possible to start, pursue or extend their work with refugees and hope that many refugees will in turn find their way to engage with a club.