A new form of slavery ?

Sport and Citizenship took part in the webinar co-organised by the Sports Group of the European Parliament and Panathlon International “Sideline- Stop Trafficking of Young African Football Player” that sought to discuss and give answers to the “football slavery” that affects European football in and outside the pitch.

We tend to consider human trafficking and sport as poles apart. In the collective imaginary, the values of sport make it a fertile ground for friendship, teamwork, passion for the game, well far from the atrocities of persecution and human trade. However, the harsh reality is different especially in football. Europe is homeland to the most prestigious clubs such as Real Madrid, Manchester United, Paris Saint-Germain.  For this reason, Europe is and has always been the Eldorado for young, poor African players, who see football and Europe as the only keys to escape. Behind successful stories of African players who reach Europe and become international players, such as Didier Drogba, Samuel Eto’o, and Sadio Mané there are thousands of backstories of exploitation and “football-slavery”. 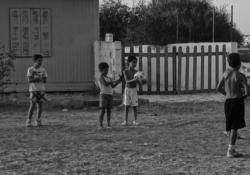 “Football-slavery” exists, and it is more current than ever: it consists in a vast and capillary panorama of figures, notably African football agents who dupe talented, young African players with promises of great careers in Europe. Most of the time players are persuaded by these people and decide to invest all their money to travel to Europe and take their chance to become a professional player. The other side of the coin is that the price they pay does not take into account all the insidiousness and problems they potentially have to face once in Europe: injuries, accommodation, the possibility of being rejected by clubs. It is therefore very likely that young African players, once rejected by European clubs or injured, are left destitute.

Numerous distinguished speakers took the floor to put forward their ideas on the topic, such as Tomasz Frankowski  (MEP, Co-Chair Sports Group), Marc Tarabella (MEP, Co-Chair Sports Group), Yves Le Lostecque (Head of Sport Unit, European Commission), Patrick Van Campenhout (president, Panathlon International) among others. From different angles, notably juridical and political, they sought to give explanations and possible solutions to the phenomenon. There are actors who directly interact with the players (clubs, coaches) who have a crucial role in the relations because they represent the point of contact with the players. On the other hand, there are the international organs and actors, such as the European Union, UEFA, and FIFA, which must have a supportive and supervisory role. While the latter’s role is not direct, it does not mean that is not under their responsibility and it is not important. One critical mistake speakers agreed on is that all the football actors must work together, either directly or indirectly to tackle this form of exploitation. Thus, by having a comprehensive approach that starts from the ground and is also supported by international stakeholders we can play a proactive role to solve the issue. The battle is long, but Didier Drogba is one out of thousands.