The FIRE+ project’s second national conference was held in the Aviva Stadium in Dublin on 21st April. Feedback from the morning of discussions, organised by the Football Association of Ireland (FAI). 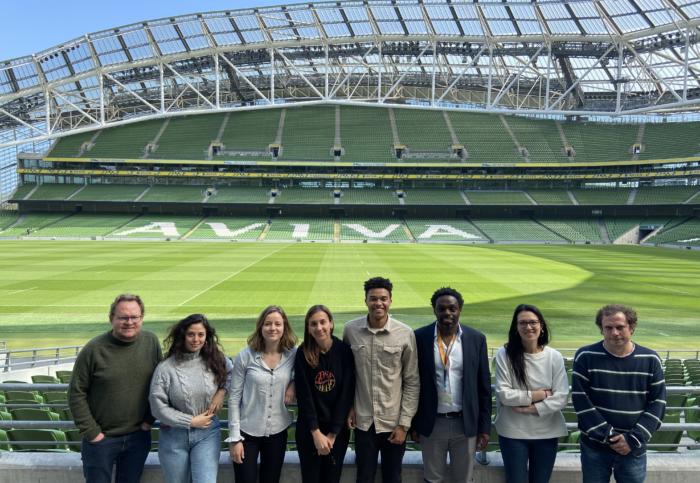 The conference, entitled “More than a Game, Football including Refugees”, brought together the FIRE+ partners and a variety of participants: representatives from sport clubs, associations, civil society and public bodies. This was a good reflection of the cross-cutting nature of the subject: the integration of refugees, migrants and asylum seekers through football.

The FIRE+ project is a continuation of the FIRE project run in 2019 and 2020. 8 partners, 8 pilot interventions programmed to take place between June and October 2022 and 3 new teaching modules to complete the FIRE MOOC, which teaches how to take all the steps needed to set up a project for using football to integrate people in exile.

Then followed two examples of projects using football, and sport in general, as a tool for integrating refugees in Ireland: the ‘Every child is your child’ association, working in Limerick, and the Bridge project, based in Galway. Donnah Vuma presented the  Every child is your child association, which focusses particularly on children who are seeking asylum. The association works to ensure that displaced children have decent living conditions and education. The association forges partnerships with sport clubs so that the children can enjoy a sporting activity. Obert Makanza then explained what the Bridge project is doing to help asylum seekers to integrate into local life in Galway. This project aims to reinforce asylum seekers’ access to sport and make it easier for them to be included in Galway sport clubs.

The morning continued with discussions between participants. A walking debate invited them to take a position on key questions about integrating people who are refugees. After that, the participants took part in two themed workshops.

The first, led by Des Tomlinson (FAI) concentrated on the inclusion of unaccompanied minors. The second, led by Marta Christianini (Liberi Nantes), looked at schemes destined specifically for women. Both workshops examined the obstacles which still make access to sport difficult for these groups, and ways of removing these barriers. Several key ideas emerged. Some of the obstacles mentioned were: the cost of doing sport which these groups cannot afford, the language barrier, and the lack of links between sport clubs and reception or accommodation centres. The traumatic experiences these people have lived through can also raise significant barriers. The participants also highlighted the fact that for women, some sporting environments can be very unwelcoming. One of the possible solutions suggested was the need for a contact person to form the link between the asylum seekers and their accommodation centres and the sport clubs and associations. Another stressed the need for role models, and the presence of former refugees and asylum seekers in the coaching staff with whom people could identify would make it easier for them to integrate sport clubs. Personalised, long-term support including psychological help to deal with trauma would also be extremely useful.