Accueil » Etnoliga: a safe and friendly environment for sport
categories:

Etnoliga: a safe and friendly environment for sport 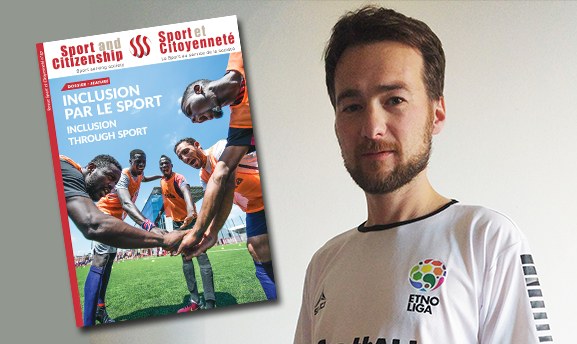 Partner of the European project FIRE (Football Including Refugees) led by Sport and Citizenship, the Fundacja dla Wolności (Editor’s note: Foundation for Freedom) leads in Poland many projects of inclusion through sport. Etnoliga is an example.

Etnoliga is a cross-cultural football program launched in 2010 in Warsaw. Our concept was very straightforward: to create a platform for physical activity that would be friendly and safe to various minorities. However, we started off we with one specific target group in mind– refugees. Although neither their number nor their situation in Poland have significantly changed since then, public awareness of their existence is much higher now. So, the idea of integration and empowerment offered the additional benefit of helping local Polish people get familiar with this ‘invisible’ community.

However, it soon became clear that the distinction between refugee and non-refugee was not the most accurate as there were several intermediate categories and forms of international protection. More importantly, migrants themselves do not used these terms very often. After all, we did not want to categorize people, rather to be extensively open.

Meanwhile, Etnoliga started to attract other groups, especially women and LGBTI. At that time women’s football was marginalized, not to mention the discrimination towards gays and lesbians in sport at large. Etnoliga turned out to be a safe space for all. We didn’t consider them as a target group at the start, they just moved in on their own accord.

Since, people tend to group around similarities (language, culture, etc.), we introduced standards that were supposed to strengthen intra-team integration and promote women and migrants. Soon, all teams became gender-mixed and the total number of women grew from a few to several dozens. As for the migrants, the rule of mixing people from different countries in each team has never been strictly kept – asylum-seekers in particular tend to prefer anonymity. We restrained from ID verifications as this could discourage them from participating.

We have made many efforts to attract it. First of all, we run a number of parallel activities directly in the centers for foreigners, which facilitates contact and insight into the needs of the community. We arrange transport, interpreters, additional training or equipment. Both sides learn to break the barriers and forget about cultural differences. On the one hand Etnoliga gives newcomers a chance to meet Poles and present their own culture, on the other – it is important not to forget that not all refugees dream of playing football (or do not yet know of its benefits).

All in all, since the launch of the program some two thousand players have participated in Etnoliga, one in four is a woman, one in ten a refugee, and more than half are foreigners.