Revue 49 of the Think tank Sport and Citizenship 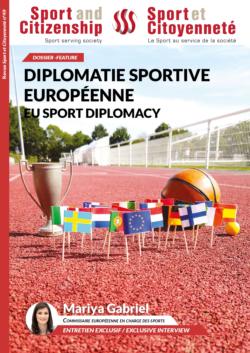 The current health crisis has been seen by many people as the chance to create something new and to develop new solutions to problems. Climate change, social inequality, the economic crisis and uncertainties in the health sector: there is no lack of challenges and they have been thrown into stark relief in recent weeks. Where is sport in all this? What role can it play in rebuilding society? In April we decided to join the debate, with a series of contributions from our network. This was nothing new for us: we have been present for more than 13 years now, when our Think Tank was set up. Using the potential of sport and physical activity in leading different policies, making sense of economic commitment by respecting individuals and the environment, constructing socially useful projects, and measuring their effectiveness.

The special focus in this quarter’s issue illustrates this capacity for change. Four years ago we focused on sporting diplomacy, we wanted to have another look at this approach today, in the light of the current situation seen from the European point of view. The expertise of members of the “Promoting a Strategic Approach to EU Sport Diplomacy” (EUSD) project coordinated by Edge Hill University and supported by the European Union’s Erasmus+ Sport programme will allow you to discover the issues involved in European Sport Diplomacy as well as thoughts about how to include this sector in the diplomacy of the EU and the Member States.

This revue was produced with the help of Edge Hill University and the EUSD project consortium, and we would like to thank them for their confidence in us.

Point of view of the European Parliament

Mariya Gabriel, In charge of innovation, research, education, culture and youth at the European Commission

“How Sport ended up in the Diplomats’ Toolbox?”

“It is all about the strategy: Australia and Sports Diplomacy 2030”
Stuart Murray, Associate Professor, Bond University and Fellow, Academy of Sport, Edinburgh University

“Switzerland and the IOC: a complicated bilateral relationship”
Quentin Tonnerre, PhD student in the history of diplomacy, University of Lausanne

“French-speaking diplomacy in the service of sport”
Sylvie Le Maux, Expert in public policy and diplomacy of sport, Strategic Council for Sports Events and Public Relations

“Sport is primarily a national social and economic project, before being a tool for diplomacy”
Romuald Nguyen, Director of the French football bureau in China 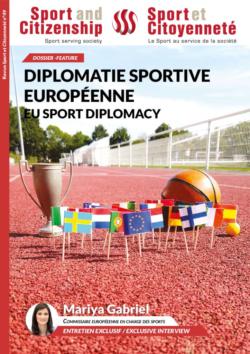