Accueil » FIRE’s ‘More than a Game- Football Including REfugees’ event to be held in Hampden Park!
categories:

FIRE’s ‘More than a Game- Football Including REfugees’ event to be held in Hampden Park!

The FIRE project’s first interactive event will take place in just 10 days (Thursday 26 September) in Scotland’s national stadium- Hampden Park (Glasgow), for a day dedicated to networking, brainstorming and sharing on how to foster the social inclusion of refugees, asylum-seekers and migrants through football. 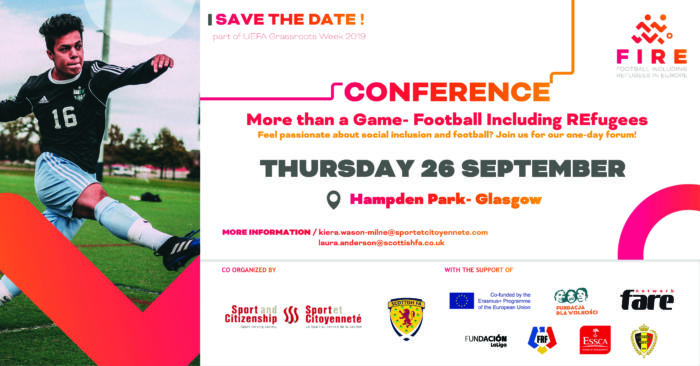 Since 2015 the political and media coverage of increased migratory influxes has been extensive- to say the least. The welcome and inclusion of such newcomers, together with the concurring challenges that may arise, has in comparison been rather neglected. Partners of the FIRE project, including ESSCA School of Management (France), Fare Network (United Kingdom), Fundacion LaLiga (Spain), Fundacja Dla Wolnosci (Poland), the Romanian Football Federation (Romania), the Royal Belgian Football Association (Belgium), and the Scottish Football Association (United Kingdom), stand together behind the firm belief that sport, and due to its global popularity football, can offer a game changing contribution to responding to such inclusion challenges.

The essence of the FIRE project is therefore founded on fostering intercultural openness within local football clubs and bodies across Europe, and on empowering and supporting the latter to be able to implement their own initiatives and programmes seeking to use football as a social medium between locals and refugees, asylum-seekers and migrants. As a reminder, the FIRE project will materialise its philosophy by creating a MOOC (Massive Open Online Course), which will provide users with freely accessible courses on how to elaborate and implement a welcome programme or activity.

Glasgow’s event is co-organised with the Scottish FA and is the first of the four conferences to be held across the continent, with the other events planned in Bucharest (December 2020), in Brussels (April 2020), and in Madrid (September 2020).

This interactive event is open to anyone from coaches, trainers, representative of sport and public bodies, local clubs and NGOs, students, practitioners, activists, researchers, and professionals working with the target group on a regular basis such as social workers or reception centres. This is an opportunity for participants to network and learn by sharing experiences, know-how and setbacks encountered upon elaborating and implementing initiatives that seek to include refugees, migrants and asylum-seekers through football.

Take a look at the event’s programme and the different stakeholders taking part:

11.50    Icebreaker and Intro to Person-Club-Community Workshops