As we approach the end of 2020, the PACTE project (Promoting Active Cities Throughout Europe) is also coming to a close. After almost 3 years of collaboration and ambitious work, project partners prepare to offer a last memorable event to stakeholders through the ‘Become an Active City! Unveiling the PACTE project’s Matrix for Change’ event, that will be held on Thursday 26 November afternoon. 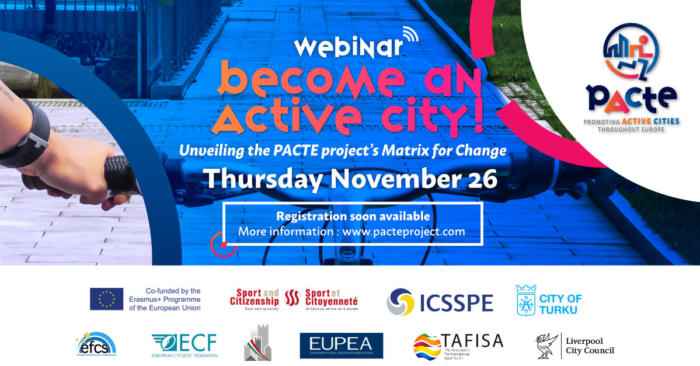 Recognised as a major public health concern, physical inactivity, and lack of equal access to movement, has taken on a very different dimension since March 2020. As the global sanitary crisis, and consequent confinements and lockdowns, have hit the European continent hard, the importance of access to physical activity and sport has earned an unprecedented amount of attention, both in the public eye and in political discourses. The PACTE project embraces a new level of relevance.

Funded by the Erasmus+ programme of the European Union, the project consortium focuses on physical activity rates across Europe from a municipal perspective, and on the creation of Active Cities. The motivation stemmed from 3 alarming facts:

These findings revealed the necessity to focus on physical activity rates at municipal level, notably since it remains a level of governance that is overlooked by researchers when, ironically, it most directly affects citizens.

PACTE delivered a European-wide representative survey and analysis of municipalities’ physical activity policies and practices, the first of its kind and scope. The project further held 4 topical workshops including Active Leisure, Active Education, Active Workplaces, and Active Mobility, which served to raise awareness, foster dialogue and networks, and share good practices and knowledge in each area. These settings were chosen since they represent areas where citizens spend most of their time, making for easily reachable population groups and for effective actions.

The time has come for PACTE to unveil its final, and most ambitious, deliverable yet- the Matrix for Change. This freely accessible and easy-to-use interactive tool will allow for municipalities to create their very own Active City Action Plan, which will guide them to become an Active City. Containing a variety of helpful and informative resources, the Matrix for Change’s check-box style allows users to undertake a unique experience and receive an entirely tailored mind-map of their priorities and choices. The Matrix for change will be launched and presented during the final event.

By embracing a cross-sectorial approach that includes experts from each topical setting, together with stakeholders of different disciplines and representatives of local and regional authorities, municipalities can achieve a much greater impact by aligning and coordinating their vision and actions toward common goals.

Join us on Thursday 26 of November to learn more! Detailed programme to be revealed soon!