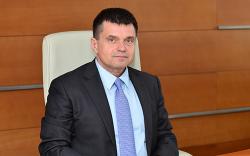 At the head of the European Union since the 1st July 2016, Slovakia intends to devote its presidency to Sports diplomacy and Education. Minister Peter Plavčan explains us why.

What are the priorities and the main events of the EU Slovak Presidency in the field of sport?
PP: The Slovak Presidency priority theme “Development of Sports Diplomacy and Education in and through Sport” is based on the strategy of the state policy in sport “Slovak Sport 2020” approved by the Government of the Slovak Republic in 2012 and is part of the 18-month programme of the current Presidency Trio (the Netherlands, Slovakia, and Malta).
The aim is to raise awareness of the role of sports diplomacy in society and to better exploit the educational potential of sport.
Within the agenda of the Education, Youth, Culture and Sport (EYCS) Council, the Presidency focuses mainly on sports diplomacy. The ambition is to initiate discussions about this issue in the context of formal EU policies and to adopt Council conclusions on sports diplomacy. The Presidency wishes to promote the positive text of the conclusions, confirming the role of sports diplomacy in society, the need for cooperation between EU Member States in this field and the close link of this agenda with third countries.
The intention of the upcoming discussions to be held by Ministers at the EYCS Council about the topic “Impact of Sport on Personal Development” is to follow-up the issues of education through sport, developed within the EU as early as 2004 which was declared the European Year of Education through Sport. The Slovak Presidency intends to invite to the Ministers discussions Danka Barteková, a successful Slovak skeet shooter, a medallist from the 2012 Summer Olympics in London, who is currently the youngest member of the International Olympic Committee.
During the Presidency, there were two major events held in Slovakia which were linked to each other in terms of contents: the conference “Education in and through Sport” and the Informal Meeting of Directors of Sport. Both took place in Bratislava, the conference on 18 to 19 July 2016 and the informal meeting on 20 July 2016.
The aim of the conference was to create a discussion platform for sharing ideas, knowledge and experience regarding our Presidency priority theme. The representatives of the EU Member States representing both the governmental and the non-governmental sector, as well as experts from outside the EU or successful world’s athletes were invited to attend the conference. Martina Moravcová, the Slovak swimming icon and Olympic medallist was among them. Discussions were focused on how to better exploit the educational potential of sport and what is the impact of sport on personal development.
The Informal Meeting of Directors of Sport was aimed at the Presidency priority theme from the perspective of the governmental sector. The discussions included the presentation of the conclusions of the conference “Education in and through Sport” and performances of experts from outside the EU who presented how sport can support the education of values and contribute to development, help transcend linguistic and sociocultural differences and contribute to achieving foreign policy goals.

”To discuss Sports Diplomacy in the context of formal EU policies”

In terms of foreign policy, some countries are singled out for non-respect of human rights when hosting major sporting events. How can sports diplomacy help to avoid such practices?
PP: The Slovak Republic is highly dedicated to respect human rights. The Slovak Presidency is in favour of promoting the respect of human rights in sport while fully respecting the autonomy of sport organisations. In this context soft tools and voluntary agreements can be of most significant impact. Precisely diplomacy is about making agreements. If sport has a soft diplomatic capacity, it could use it in order to develop hosting agreements where clear engagements are made between event promoters and hosts. However, one should remember that major sporting events are in general attributed to hosts up to seven years before the event. Having this in mind suggests that those who make the engagements may be others than those who will effectively organize major sporting events later on! Nevertheless, such agreements would be significant steps in the right direction.

”Soft tools can have a significant impact”

Are you in favour of a specific article on human rights and sport in the European Convention on Human Rights?
PP: In general, I agree with an approach to solve sport issues in broader dimension taking into account the European view. Anyway, the European Convention on Human Rights covers human rights in “all” circumstances, including sport environment, therefore the suggestion about the need of specific paragraph on “human rights and sport” is questionable. However, if it is a wish of the Council of Europe Member States then it is certainly a topic to be discussed with all relevant national authorities and stakeholders acting in the field of sport.

What do you expect from the second edition of the European Week of Sport (EWoS) and its opening in Košice?
PP: We are pleased that the EWoS 2016 will take place during the Slovak Presidency with the participation of the Commissioner Tibor Navracsics and other important guests. It is an initiative of the European Commission which has taken place in almost all EU Member States since the last year. The Slovak Presidency intends to open the EWoS by a video message addressed by the phenomenal Slovak cyclist Peter Sagan to the European audience. Finally, I would like to emphasise that the whole agenda in the field of sport has one denominator, namely the development of human resources in sport focused on athletes. I believe that using this way we manage to interconnect all our priorities and events taking place within the Slovak Presidency of the Council of the EU in the field of sport and highlight the values of sport.