Accueil » “Sport as a tool for the inclusion of migrants”
categories:

“sport as a tool for the inclusion of migrants”

Every month, Dr Anna Gerke, Associate Professor at Audencia Business School and Member of the Board of our Think tank is sharing a piece. Through her a professional trip to Australia, we discover how sport is understood on the island continent. 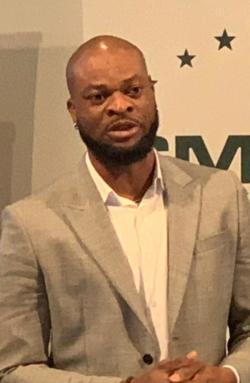 Interview with Richard Ajiee, Lecturer at Auckland University of Technology (AUT – New Zealand), about sport as a means for the integration of immigrants

Richard, your PhD topic was related to sport as a tool to integrate immigrants. Could you give me an overview of your project?

RA: Well, the topic of my thesis was “The contribution of community sports to the integration of immigrants”. When I say community sports, I mean sports at a community level, not professional sport. I looked at “everyday immigrants”. That includes refugees, students, but also people that came to New Zealand as skilled workers or for family reunification. The spectrum of immigrants was quite large. They were regular immigrants that actively played sports.

The main aim was to understand how sports contribute to the integration of these immigrants and how sports helped the acquire social capital. We wanted to know what the efficacy of sport is as vehicle of integration for immigrants. The first thing we looked at was how did immigrants access sport or start sports. Then we looked at how that sport facilitated their integration. One of our objectives was to be able to share the story of those immigrants. We used the method of narrative inquiry and storytelling. That means my task was to get the immigrants to tell me their story and my thesis provided a platform to share these stories. The result of my thesis was actually presented as short stories about each immigrant. These stories enabled us to see quite clearly the role sports played in the lives of those immigrants, enunciating how immigrants use or did not use sports for their integration.

Could you tell me why you chose this topic?

RA: There are a lot of reasons why I decided to choose this topic. To give you a bit more background, I used to live in Europe, Finland specifically. That was where I did my masters degree. Initially when I arrived Finland, I used to live and study in a small town. In Nigeria, I used to play a lot of sports, especially football, but in the school in Finland, there was no football and not a lot of sports in general. Together with another Nigerians that I met; we started some small sided football games. In no time, more and more people started coming to our improvised matches. Most of them were refugees, many Africans. The small sided games gradually metamorphosed into a small football team. This led to what was referred to as an ‘immigrant football team’ and we started playing against the local teams. I observed that a lot of the immigrants were able to connect with locals through their participation. Also, personally, compared with my other African colleagues that we were studying together, I was able to integrate quite well through my football involvement in the community and with the team. For my thesis I wanted to do something about sport for development or sport for change. However, as an immigrant that has been travelling through many countries, my supervisor then encouraged me to match my interests in sport for development with my interest in migration and community sport.

Could you share a few more insights concerning the people that you studied? What surprised you or what was very interesting in the results of your study?

RA: I followed the immigrants for 12 months and we became friends along the time. Let’s start with the German immigrant who was the dissenting voice in the research. For him, sport never helped for integration. He arrived in New Zealand in 1983 from Germany. He used to play and coach table tennis back in Germany. However, when he started to live in a small place in the South of Auckland, there was no table tennis. Some of the reasons why sport never really helped him was that the population at the table tennis club he later joined was quite small. Another problem was that table tennis was not very common. Another point he gave was the culture in the sport clubs. In New Zealand, people play sports together and then go home. However, in Germany, you play the sport together, but you also do everything else outside the sport together- which creates a lot of bonds. This was not the case in New Zealand.

Another case was Ali from Afghanistan. He was a war refugee and he came with his parents to New Zealand at the age of 11. When he arrived, he didn’t speak English. He started school in New Zealand and saw other kids playing football but since he didn’t speak English he couldn’t tell them that he wanted to play with them. In time he met another Afghan boy who spoke English and he helped him join the football game. That is when Ali started to learn English himself. Ali even joined the local football club but at some point, his family could not afford the fees for the club, so he had to quit. Therefore, Ali had to manage with playing with his brother and father in the park. As luck would have it, one day while playing in the park, a cricket ball of a team training next to them in the park rolled to him. He threw the ball back to the team and he threw it so well that he was admitted to the cricket team. He never looked back from there and sport has helped him throughout his entire life in New Zealand; in school, in personal life and then through his professional career. There was a similar story with a Nigerian immigrant who came to New Zealand when he was 9 years old. In Nigeria, you don’t do much sport when you are from a middle-class family- you study. However, in New Zealand, it was different as they do sport as school. Therefore, he got a lot of support from his parents for doing sports, which was not the case in Nigeria. He realised something else, he could use sport to make friends and expand his network. Well, those are just a few examples of the stories that I learnt.

Those cases are very interesting. I would like to follow up a bit. One thing I noticed in your stories is that one immigrant met another immigrant and that again helped him to access other people. Is that a pattern? Then my second question, is integration about meeting local people or other immigrants?

RA: When you meet a fellow immigrant, that is not integration, but it helps you to settle faster. It is not until you join a mainstream local sport team that you meet locals. Often meeting another immigrant helps to gain access into a local team and only then does the integration start. In some cases, the immigrants met the local team while playing for an ‘immigrant team’ that played against a local team. That enabled them to make the connection. However, it seems that some cultures prefer to play only amongst themselves, for example Chinese. That makes integration difficult.

You had different ethnicities and nationalities in your study. Do you think the characteristics of particular ethnicities influence the ability of sport to help with the integration process or is it more personal traits that impact the efficacy of sports as integrator?

RA: I would like to explore this question with future research, but I can say that in some cases the immigrant played first in an immigrant or refugee team consisting of different immigrants’ nationalities. They then had the opportunity to play against and meet local teams. That made connections with locals and often allowed immigrants to join local teams. Today I cannot tell whether cultural aspects play a role, but I suspect they do. Sport Organisations are mostly driven by sport participation but there is no framework to integrate immigrants in community sport. To sum it up, integration is the mutual interaction between locals /hosts and immigrants.