Accueil » The European Parliament’s ‘Report on an integrated approach to Sport Policy: good governance, accessibility and integrity’ and its significance for Sport and Citizenship’s PACTE project
categories:

The European Parliament’s ‘Report on an integrated approach to Sport Policy: good governance, accessibility and integrity’ and its significance for Sport and Citizenship’s PACTE project

Human beings are designed to move. All forms of movement are therefore necessary for a human being’s health. From walking to the post box to competing in a high intensity sporting event, any type of physical activity is essential for the body.

The think tank Sport and Citizenship’s ongoing PASS (Physical Activity Serving Society) project and its upcoming PACTE (Promoting Active Cities Throughout Europe) project consist together of theoretical and practical deliberations on the importance of physical activity and on how to develop cities in order to make physical activity part of daily life. 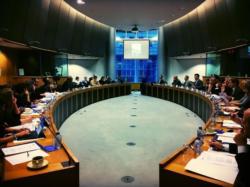 The European Parliament’s CULT commission’s recent announcement of the adoption of the ‘Report on an integrated approach to Sport Policy: good governance, accessibility and integrity’ echoes Sport and Citizenship’s arguments on the benefits of physical activity. This report was presented by Hannu Takkula on Monday 12 December 2016 and adopted on Thursday 2 February 2017.

The 59th amendment of the report “highlights the fact that sport and physical activity should be promoted in a better way across policy sector” and “encourages local authorities and municipalities to promote equal access to physical activity.” The promotion of physical activity lies at the heart of the think tank Sport and Citizenship’s ongoing PASS project and its upcoming PACTE project. The 59th amendment of the report also “recommends the Member States and the Commission to encourage citizens to pursue physical activities on a more regular basis by means of appropriate health policies and programmes for their daily lives.” The key concept of the PACTE project is the move towards Active Cities: cities in which the infrastructure is designed to enable citizens to complete their journeys whilst being physically active. For example, investing in safe bicycle tracks would allow commuters to ride their bike to work. As the 59th amendment implies, the onus is on the local authorities to bring about the conditions necessary for more physical activity in European citizens’ daily lives.

The adoption of Takkula’s report are encouraging signs of the European institutions’ valuation of and commitment to the importance of physical activity for European citizens. The think tank Sport and Citizenship sees its PACTE project, which aims to stimulate change at local level, as a concrete strategy to make Europeans more physically active.