Accueil » The Football People Festival opens its door in an online format this year
categories:

Between 19 and 23 October, the Fare organised the first online “Festival of Ideas: Football, Social Change, and Equality”. Sport and Citizenship took part in the event attending two panels: “Gendered violence in Sport: What is it and how do we tackle it?” and “Refugees and football”. It was interesting to hear experts debating on the criticalities of gender equality in football and the role of the latter in shaping a comprehensive and welcoming environment for refugees in Europe. Considering our partnership with Fare through our Football including REfugees project (FIRE) and the importance gender equality, in and around sport, has within our strategy, we were delighted to attend this event. 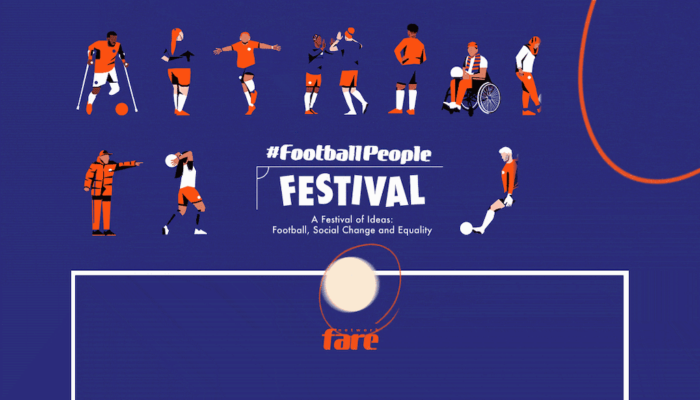 On 21 October, “Gendered Violence in Sport: What is it and how do we tackle it?” mainly examined what needs to change in the football ecosystem which enables sexism, and the structures of sport that fail to act on it to ensure safety for women as players, coaches, and fans.

Jessica Luther (author and journalist) moderated the session with Dr. Claudia Benavides Ambs (Sport Management at Arkansas State University), Joyce Cook (Chief Societal Responsibility and Education Officer at UEFA), and Solvejg Wolfers (Ph.D. student at University of Warwick). Considering speakers’ heterogeneous backgrounds, the discussion was broad and passionate- several aspects such as the importance of language, or the role of football institutions were addressed. Speakers shone the spotlight on the notion of masculinity, which remains predominant in football, as the main issues to tackle. They also pointed out the role of football as a litmus test for our societies. Indeed, sport mirrors our society and therefore represents perpetration of the status quo dominated by men. The role of sport, and especially football, considering its mediatic echo, is to address the exclusion of women and turn this “arena dominated by men” into an open field for inclusion and participation. Speakers closed the panel underlining the importance of communication against misinformation, defined as the “worst enemy” of gender equality in sport. They also added the necessity of breaking stereotypes when it comes to women and football since they are the main barriers towards a more comprehensive football environment.

On 23 October, we followed the conference “Refugees and Football” that stressed the importance of sport, and in particular football in empowering refugees in Europe. Since the beginning of the ‘refugees’ crisis’ in 2015, the European Union has sought to find tangible solutions for more inclusion in Europe. Football has always been an efficient tool towards an effective inclusion. The conference examined sport’s contribution to supporting refugee communities and it also sought to understand how football can be used as a vector to impact public policy and opinion within host countries. Natalie Gedra (ESPN Brazil) moderated the session with Laura Sentis (Foundation of FC Barcelona), Rozma Ghafouri (Refugee football coach), Nick Sore (UN Refugee Agency), Hussein Abbas (Barça Foundation Educator), and Monica Namy (Social Responsibility Manager UEFA).

Through the presentation of case-studies brought forward by Rozma Ghafouri about her personal experience as a refugee coach and by Laura Sentis as part of the Barça Foundation, we shone light on the importance grassroots approach put into practice by numerous football actors from the civil society, until the international federations. Nick Sore and Monica Namy brought forward initiatives and contributions, international institutions such as the UN, and especially UEFA envisaged and put into practice for supporting refugees. Indeed, UEFA’s role, as Namy pointed out, is to uphold funding opportunities also in the field of inclusion of refugees, and to raise awareness on the importance of this societal challenge.

Speakers also agreed on the idea that football is not enough to reach a full and holistic inclusion.Football, indeed, must be complemented with other actions such as  language courses and psychological support, to create a multidimensional approach to properly address the needs of refugees. To conclude, Natalie Gedra challenged the speakers underlying the importance of media platforms to communicate all the positive stories linked to football and inclusion in Europe.

The FootballPeople Festival was a fruitful occasion to hear and debate on issues that affect sport and our society today.

As underlined before, Sport and Citizenship considers gender equality in and around sport as a top priority. Furthermore, we are currently leading the FIRE project, of which Fare is a partner. The project aims to empower refugees and contribute to a more comprehensive local inclusion through football.