While the many were present at the Sport Infoday, some others attended a conference in European Parliament, on the subject of wheelchair rugby. Hosted by Mep and head of the European Parliament Rugby Union (EPRUI) Derek Vaughan, the event was animated by Dr. Sofia Beloka, European Development Commissioner for the International Wheelchair Rugby Federation (IWRF), and Bob Vanackere and Frederik Windey, respectively trainer and player for the National Belgian wheelchair rugby team. 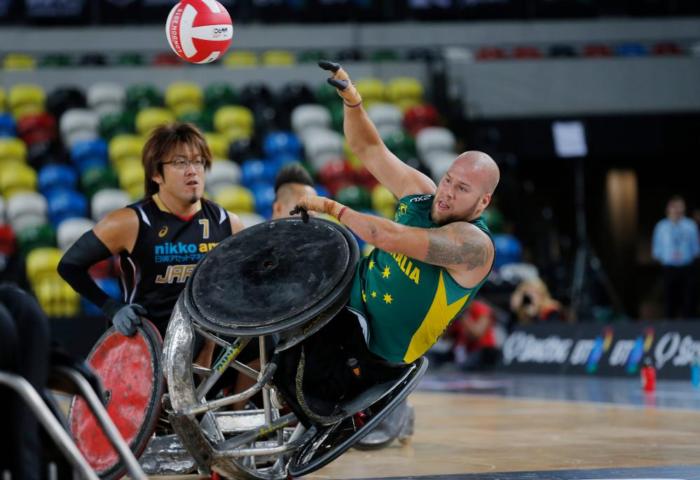 The sport itself was created in 1977 in Canada, in response to including more players than was the case in wheelchair basketball. Mixing rules from several other wheelchair team sports, wheelchair rugby consists in a team of 4 players together accumulating a total of 8 disability classification points. Although the sport is gender mixed, only 74 female players are enlisted on the world rankings- against 1 600 male players. Consequently, the percentage of women making the cut for national teams is rather narrow, yet not unheard of.

The IWRF established itself as a federation in 1993, to then further become the main governing body of the sport, and an independent sport federation in 2010. The sport was introduced into the Paralympic Games in 2000, and was even voted as most spectacular Paralympic sport during London 2012! Indeed, make no mistake wheelchair rugby is the only Paralympic sport permitting contact between chairs.

While the European zone is the most active with 17 active countries and 7 others in development, wheelchair rugby is aiming to become the world leader wheelchair sport. Dr. Beloka’s role is to create cross-national collaborations between countries having established the sport and those seeking to do so in order to help the process. Financial budget is obviously an obstacle to the development of the sport as the required chair can cost up to € 8 000, and as lower level leagues and championships struggle to find financial backing.

Finally, Mr. Vanacker and Mr. Windey shared their experience of the game and the positive aspects it brought them before even becoming professional players- which go much further than being part of their rehabilitation process. The sport is described as a source of inspiration for new players who witness what can be achieved, but also as a treasure chest of information as players exchange their tricks to manage to get about daily life as independently and comfortably as possible.