Accueil » Spain: Football for the inclusion of refugees based on conviviality
categories:

Spain: Football for the inclusion of refugees based on conviviality

Pilot project supported by the FIRE project, the Dragones Football Club operates in a neighbourhood in the heart of Madrid. With its diverse membership, it is an innovative laboratory for inclusion through football, where conviviality plays a central role. 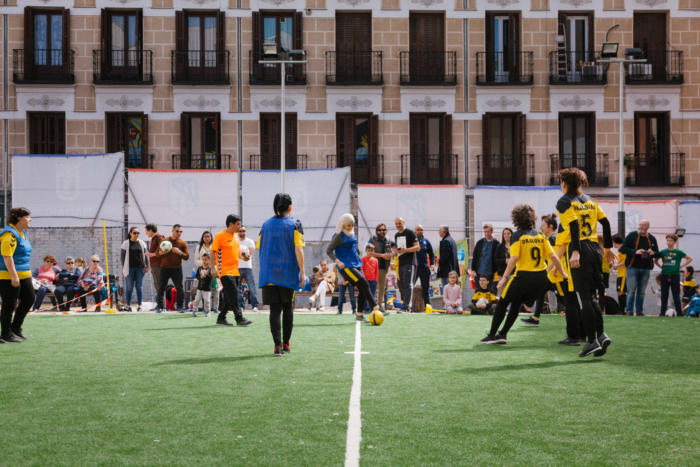 Dragones Football Club was created in this neighbourhood in the heart of Madrid by a blind president and some families with adoptive sons and daughters. It was clear from the beginning that ethnicity or cultural background weren´t the only features defining identity boundaries. Though they were astounding in our first five teams we realized that more than thirty national origins were present.

Seven years later, Dragones is formed by players come from more than fifty countries. The “super-diversity” defined by Steven Vertovec1 was not a concept that we knew when we started playing football in Lavapiés, but for us it is an intersection of many lines and identities. Besides race and ethnicity we were aware that gender, sex orientation, different abilities, social class, religion and language had a big importance in our football club.

We were going to play football across all these lines. And though it was not an experiment because real life was involved, we aimed to thrive and to trigger creativity, participation and inclusion. To our surprise that´s what happened: migrant Muslim mothers decided to play football after years of just cheering kids, a Senegalese coach without papers was able to regularize his legal situation and created a school and a football club in his village and we were able to integrate in our teams “unaccompanied foreign minors” and refugees.

As it happened with “superdiversity” term or Hancock’s “intersectionality”, we discovered after the practice that there were some handbooks that could have guided us but we started with anxiety and some fear, especially when we added four or five teenagers coming from refugee centres to the juvenile teams. The experience with small kids from immigrant families always had been positive.

We wondered if older players, more competitive, would be open to share playing time in the matches and if new conflicts that we wouldn´t be able to manage would be created. It never happened. In all these years, as we believed, diversity created an environment that was welcoming.

What we have observed is that the collaboration between organizations is key for the success in the inclusion of refugees. Our refugee players were able to play football because they felt safe, not discriminated and supported. Also because we were taking advantage of other concept that Gilroy calls “conviviality”3 and that could be translated as the “cosmopolitan solidarity” based on grass-roots humanity.