Accueil » The 1982 World Cup and media coverage of sport in Italy
categories:

The 1982 World Cup and media coverage of sport in Italy

The conference “World History: sport, the media and society from 1982 to the present”, organised by the University of Bologna, was held in the prestigious surroundings of the Biblioteca comunale Archiginnasio in Bologna (Italy), the former seat of the city’s university, converted into a library in 1803 by Napoleon, on Friday 21 October 2022. 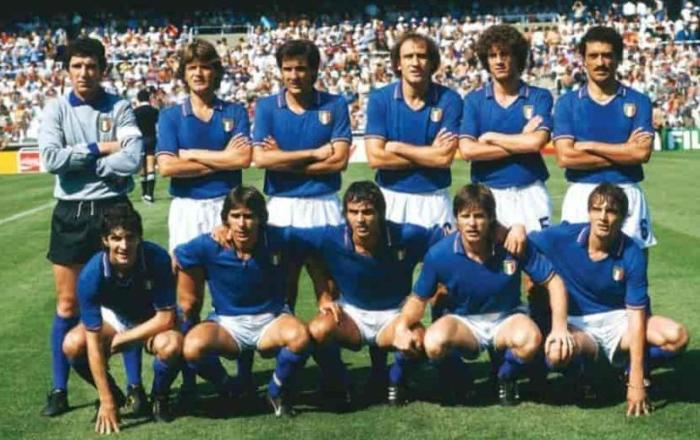 The conference was held in the context of the International History Festival, in honour of Stefano Martelli. Martelli, who died in October 2020 at the age of 68, was professor of the sociology of culture and communications at the University of Bologna and a pioneer in the discipline. He also founded the SportComLab – a study and research centre on sport communications at the University of Bologna. The conference brought together some of the leading Italian specialists on the sociology of sport who recalled Martelli’s scientific legacy to talk about the importance of Italy’s victory in the 1982 World Cup, from a social point of view for the nation, and as a major media event. The conference was an opportunity to review research in the field of sport and the media in Italy, which was given such an impetus by Martelli.

The first part of the conference, led by Maurizio Marano (University of Bologna), was entitled “From Italy 1982 to myth: context and representations of a Football World Cup”. Nicola Porro (University of Cassino) opened the morning’s rich series of discussions. In 2013, Porro and Martelli were co-authors of a manual on the sociology of sport which remains a reference on the subject. Porro highlighted the role of the Italian victory in the 1982 World Cup in constructing a national identity and said that Italy’s later victory in the 2006 World Cup in Germany did not have the same impact. Alberto Guasco (CNR – Institute of Mediterranean European History) recalled the pedigree of the sports journalists writing about the World Cup in 1982, from Nando Martellini on television to the late Gianni Mura for the print media. Guasco also evoked the writers who worked as sports journalists for the 1982 World Cup, including Giovanni Arpino, Oreste del Buono, Mario Soldati and, of course, Gianni Brera, the epitome of Italian sports journalism for all time and also a novelist. In Guasco’s opinion, the treatment of the 1982 World Cup became a model for coverage of succeeding World Cups. The historian Riccardo Brizzi (University of Bologna) quoted another writer who was also a sports journalist, and the best known: Pier Paolo Pasolini. Brizzi described the socio-political context of the 1980s, with a victorious World championship and the collective euphoria, but also with the assassination of the Prefect of Palermo, Carlo Alberto dalla Chiesa, killed on 3 September 1982, just a few weeks after the final at Santiago Bernabéu on 11 July. Throughout the 80s, the Italian championship was “the best in the world”, said Brizzi, partly thanks to the international players in Serie A teams, such as Diego Maradona, Michel Platini and Falcão, to name but a few. In the 1989-90 season, the three big European competitions at the time were won by three Italian teams: the European Champion Clubs’ Cup by AC Milan, the European Cup Winners’ Cup by Sampdoria in Genoa and the UEFA Cup by Juventus. The 80s also represented a great season for media coverage of football. Televised talk shows were taking off, with, for example, “Il Processo del Lunedi” with Aldo Biscardi, with guests including athletes, players and trainers, and also intellectuals and politicians. Nicola Sbetti (University of Bologna) completed the excursion into history with the 1990s. During this decade, football changed to become more attractive as entertainment. In other words, football evolved in response to the demands of the media, particularly television. In line with this, modifications were introduced to the game, such as three points for a win (1994) and the use of

three substitutes (1995). These were the years that saw the beginning if pay-to-view television during the Italian championship (1993-4). Ivo S. Germano (University of Molise) closed the first part of the conference with some personal anecdotes. Ivo is the son of Stefano Germano, former journalist in charge of international football with the magazine Guerin Sportivo. Germano gave an excellent overview of the state of sports journalism in the years around the 1982 World Cup, which he saw as being characterised by three key elements: 1) until the 1982 World Cup, sports journalism had held a central place in the Italian public debate; 2) during these years the different media (print, radio and television) coexisted successfully; and 3) the sporting myth was an account of popular sentiment. According to Germano, the 1982 World Cup marked the last great season for the Italian printed press and began the transition to a new journalistic language.

The second part of the conference, entitled “Sport, a cultural fact: the studies of Stefano Martelli”, led by Alberto Marinelli (Sapienza University of Rome) opened with greetings from William Gasparini (University of Strasbourg) and Alessandro Porrovecchio (University of the Littoral Côte d’Opale and ESA Research Network 28). Roberto Famè (University of Bologna), teacher and member of the “Sport e Salute” bureau talked about his collaboration with Martelli in the study of sociological questions within the University of Bologna’s Faculty of Sport Science, an approach which still distinguishes the Faculty in Bologna from those in other universities. Nico Bortoletto (University of Teramo) looked at the theme of volunteering in sport. Everyone knows that volunteers are vital for amateur or grassroots sport to work. The latest data from the Italian Olympic Committee on sport associations in Italy shows that unfortunately the number of volunteers declined during the pandemic (2019-2020). However, the report also shows that there are still 460,000 volunteers involved in sport in Italy. In Giovanni Boccia Artieri’s view (University of Urbino), if Stefano Martelli was still alive today, he would be concentrating on the explosion of sport in society, as it becomes increasingly accessible to all, as can be seen from things like fitness and wellness. Nicola Strizzolo (University of Teramo) described Martelli as a 360° expert on the media and recalled his great scientific rigour, one of his main contributions in interaction with colleagues and students. According to Strizzolo, media coverage of sport today, influenced by big brands, instead of promoting “education through sport” ends up creating consumers and brand ambassadors.

The conference was closed by Giovanna Russo, the event coordinator, researcher in the University of Bologna’s department of Education Sciences, a former pupil of Martelli, and who worked with him for ten years. Russo’s communication has the meaningful title “The sociology of sport, beyond sport”.