Sport and Discrimination in Europe

Journal n°17, by the Think tank Sport and Citizenship 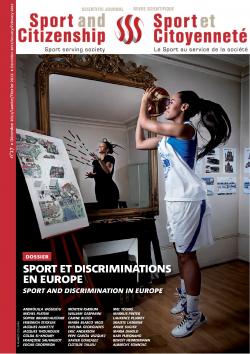 As announced in our last issue, on 23rd November the European Commission proposed a new programme for education, training, youth and sport during the period 2014- 2020. This huge programme entitled “Erasmus for All”, if approved by the Commission, will have an overall budget of €19 billion over seven years (an increase of 85% compared with current funding), including €238 million devoted to sport. A new departure. In the light of the current economic situation facing the EU, this is a great victory. The fact that sport is included in this wide ranging and ambitious portfolio is another. The sports movement and civil society, along with the European institutions, are thus rewarded for the effort they have put into ensuring that sport is recognised as a vehicle for bringing about new encounters and exchanges and a tool that can help develop European citizenship. Our think tank is very proud to be part of this new step forward. The signal sent by the Commission is very encouraging. Now it is up to all of us to develop this European dimension in sport with innovative projects.

One of the major policy lines for the next ten years defined by the Commissioner in charge of sport, Androulla Vassiliou, concerns the fight against transnational threats such as doping, match-fixing, violence, racism and intolerance. These problems frequently hit the headlines, so this is an enormous undertaking. We have decided to join the debate, so this quarter we are exploring the question of discrimination in sport. Etymologically, to discriminate means to separate or make distinctions. Recognising a difference is not necessarily discrimination; it only becomes so when it is based on unlawful criteria: gender, race, skin colour, religion and so on. Since it is a mirror of society, sport cannot avoid forms of discrimination. It is perhaps better placed than any other activity to get rid of prejudice, though, by facilitating contact and encounters between people.

“Sport and discrimination in Europe”

“Sport and discrimination: the contradictions inherent in a universal practice”

“Racism in sport: some progress to be confirmed”

“Modern sport and the “white-masculine” bias”

“Paralympic Sport as an Agent for Change”

“Links between the sports movement and prisons” 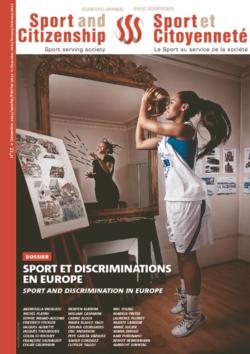