Accueil » “An accelerator for our sport’s structuring and popularity”
categories:

“An accelerator for our sport’s structuring and popularity”

Candice Prévost, a former female footballer at Paris Saint-Germain, assesses the progress made over the last few years in raising the visibility of women’s football, and examines the idea of sport as a powerful tool for social progress. 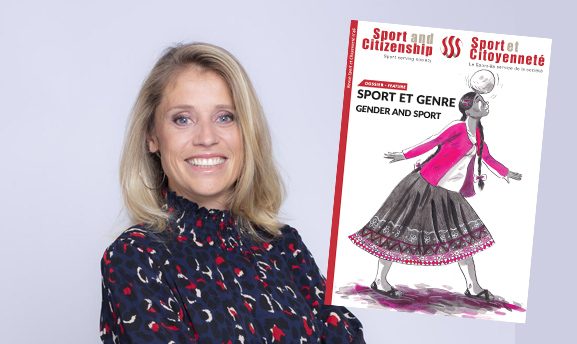 How do you see the changes in women’s football?

CP: I’ve been watching this evolution closely, as a player and then as a consultant, a manager and lastly as the producer of the documentary “Little Miss Soccer”. The main change took place at the media level. D8, Eurosport, W9, Canal+ and TF1 accelerated the structuring of the top level and accustomed French viewers to women’s football. This visibility gave it legitimacy.

Although women’s football is shown more often and attitudes are changing, partly due to the results and the talent of the women players, it is not yet comfortably installed. This can be observed more generally when looking at the place of women in society, as well.

You and Mélina Boetti initiated the Little Miss Soccer project (cf. p.2), a look at women footballers around the world. Why this project?

CP: Today, mote than 33 million women in the world play football…and even more now than when we started nearly two years ago. We set off with a camera in our hand and a ball at our feet, full of curiosity, to find them. We have explored the “Football Planet” in all 5 continents with one big objective: to shine the spotlight on the girls and women whose right to play is a constant challenge.

We wanted to tell the story of women who are more or less invisible; stories where the round ball is a force for empowerment, a reflection of the society and living conditions of these women. Each individual story takes its place in football’s commitment at the time of the World Cup in the form of a documentary (to be broadcast on Planète on 6th June and later on Canal+ during the World Cup) and an illustrated book.

What role can football play in making women independent?

CP: The simple fact of playing football as a girl or a woman is in itself a form of emancipation and a sort of independence. It must be remembered that football is generally considered to be a sport belonging to men. Unfortunately, that is literally true all over the world! It has really become universal since women started to play. In every society, women players fight more or less seriously against a background of machismo which is more or less deeply ingrained. Football is a powerful tool for empowerment in as much as it represents a challenge, not to say a provocation, but it is useful for changing mindsets. When women take over the pitch, the detractors get used to it and the most feminist among them applaud. More than giving autonomy, football should bring men and women together and impose a natural solidarity which will allow each man or women to find enjoyment on the pitch and off it.