The III European Week of Sport’s official opening ceremony took place in Tartu (Estonia) under the Council of the European Union’s Estonian Presidency. European Commission officials alongside representatives of European sport and health organisations gathered between September 21 and 23 in Tartu, where they attended conferences and debates about sport and education, and the importance of promoting and teaching healthy lifestyles as a whole in order to deal efficiently with Europe’s inactivity.

Before presenting the Tartu Call for a Healthy Lifestyle for the first time, Tibor Navracsics shared some concluding words on what he personally perceives as key elements to make European citizens more active and healthy all-round.

To start, Mr. Navracsics believes that physical activity and sport must be more community-based as it shall thus attract individuals to join in- rather than the opposite way round. He believes the recent growth of inactivity is partly due to the comfortable lives we are presently born into, but is also the result of the atomisation of societies. In this way, physical activity needs to be re-socialised since a healthy lifestyle is, before all, a true lifestyle. Genuine recognition was given towards international sports industries’ recent effort to create trendy sportswear- for a second aspect of re-introducing physical activity in daily lives will be by making sport fashionable.  In link to the private industrial role of sports, the commissioner stressed that while conferences of the likes of Tartu are a good beginning, the near future must witness many more collaborations between private, public and non-governmental bodies involved in sport. These collaborations will be the most efficient path to tackle the issues at stake. When reflecting about the inactive European citizens that are to be guided and taught into physical activity, the issue of accessibility was raised and a proposal for a European night of sport open to all was made, so that people could experience some uplifting feelings as a source of motivation.

Finally, the Commissioner for Education, Culture, Youth and Sport, with the help of Vytenis Andriukaitis the Commissioner for Health and Food Safety, and the representative for the Commissioner of Agricultural and Rural Development Phil Hogan, unveiled the Tartu Call for a Healthy Lifestyle.  All three signed the document in agreement to support and take action towards the fifteen outlined points, within the next two-years. These points evolved around mobilizing more budget to enhance sporting opportunities and promote them, teaching children healthy diets and behaviours but also older people and the disadvantaged in the quest for a fairer society, opening up an intra-Commission dialogue between the Health and Sport sectors, supporting and increasing current and future data collection and research on individuals’ current habits and lifestyles- and how these affect them in their different socio-economical groups; and how to promote physical activity in the work place. 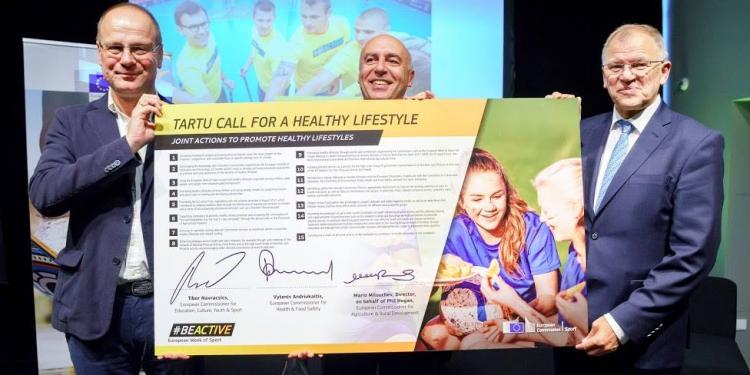 Sport and Citizenship fiercely supports the Tartu Call since we have been advocating the positive societal impacts of sports for a decade now. All the more, the preliminary outcomes of our current PASS Project are pointing in the same direction. Funded by the European Commission, Physical Activity Serving Society will come to its end next December. The main findings indicate an alarming, and growing, state of inactivity across Europe that stresses the urgency of countering the situation straight away. PASS also brings into light how regular physical activity is beneficial for physical and mental health, but also for a variety of other aspects in people’s day to day lives. The financial perspective is equally revealing as physical inactivity is weighed to cost the EU28 a minimum of 80 billion euros each year. Sport and Citizenship can only shoulder the Tartu Call and all other organisations working, researching, collaborating, and innovating to fight physical inactivity. However we do believe the Call would bare more weight with more Commissioners present to sign the document. Point 7 and 8 of the Call specifically mention achieving more cross-sector cooperation, so the presence of other concerned Commissioners would have delivered a stronger and more dedicated message overall. For example, the Commissioner for Transport and Mobility, Violeta Bulc, and Corina Cretu, in charge of Regional and Urban Policy, will obviously have roles to play to see through the Call. Notwithstanding the achievement for sport and physical activity to be increasingly taken into account by European policy-makers, perhaps the wisest next step would be to extend the Call to other Commissioners?