Accueil » FIRE’s national conferences off to a flying start with the Scottish FA!
categories:

FIRE’s national conferences off to a flying start with the Scottish FA!

The first of four national conferences took place in Hampden Park (Glasgow), home to Scotland’s national stadium, on Thursday 26 September during the 5th European Week of Sport and UEFA’s Grassroots Week 2019. A large number of participants and excellent hosting and organisation on behalf of the Scottish FA staff (project partner) made up a great day all round. 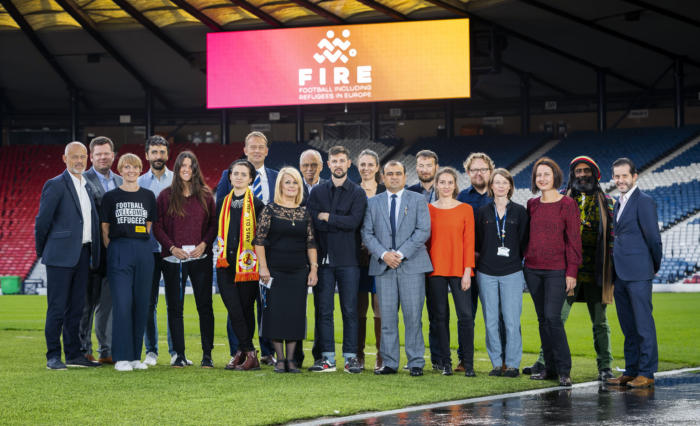 The ‘More than a game- Football Including REfugees’ interactive conference gathered over 80 participants from the sport sector, civil society, different levels of government and government-related organisations, which successfully reflect the diversity of involved stakeholders when it comes to the social inclusion of refugees, migrants and asylum-seekers. Following a formal welcome on behalf of the Scottish FA, and an overview of the FIRE project’s philosophy and objectives, the programme got into the thick of things when learning about the State-of-the-Art research- ‘The Inventory’. While many mappings, collection of good practices, and toolkits on the topic of the social inclusion of refugees and migrants through sport already exist, FIRE adopted a slightly different approach. In addition to mapping the existing documents, and to focusing on football, the Inventory further identified the common main issues, major needs and good practices while also conceptualising key terms and ideas. The Inventory hence serves as a basis upon which FIRE conferences lean and which lays out the foundations of a roadmap for the design of the FIRE MOOC.

Moderated by Piara Powar (Fare network) a Q&A panel offered a holistic vision on the role of football in the inclusion of refugees, migrants and asylum-seekers, with Abdul Bostani (Glasgow Afghan United FC), David McArdle (Diversity and Inclusion Manager, SFA) and Lorna Gledhill (Scottish Refugee Council). The discussion emphasised the importance of collaborating with grassroots actors in order to monitor the accessibility of activities, their popularity, and how to reach out farther to fight isolation.

After participant questions, three topical workshops took place, the first of which was led by Ahlam Souidi (Freedom from Torture), focusing on the ‘person’ theme. The second workshop, centred around ‘clubs’, was steered by Paul McNeil and Danny Bisland (Scottish FA) and included the inspiring example of St Peters Football Club (Paul Kinnaird) who have outdone themselves to include young refugees into their daily activities and trainings. The final ‘community’ workshop was steered by Naomi Westland (Football Welcomes programme, Amnesty International UK) and Pauline Kelly (Media & Communications, Amnesty International Scotland) brainstormed over creating community alliances. 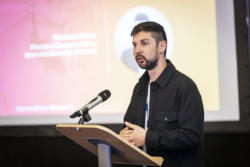 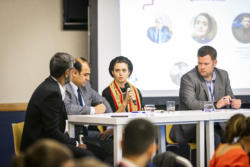 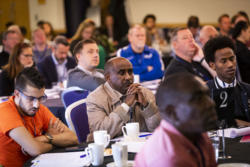 To bring the day to a close, Councillor Graham Campbell (Glasgow City Council) shared some intriguing local history about the colonial ties between Scotland and Jamaica, the presence of Black football players in Scottish football and how football can be used to fight racism in the game. Scottish Minister for Public Health, Sport and Wellbieng, Joe FitzPatrick, formally closed the protocol and shared his belief in Scotland’s proactive role towards such social issues.

The next edition will be held during the second week of December in Bucharest- keep an eye out for further information!