Accueil » Football Including Refugees (FIRE): the project has been launched in Brussels!
categories:

Football Including Refugees (FIRE): the project has been launched in Brussels!

The kick-off meeting of the Football Including Refugees (FIRE) project took place on Thursday 14th and Friday 15th in the House of Sport (Brussels, BELGIUM). Partners met on this occasion to discuss the next steps of their collaboration during the next 24 months.

The project will be coordinated by Sport and Citizenship and will rely on an intensive collaboration between every actor involved in order to achieve the ambitions as set out in the application. Each partner was represented during the meeting: the FARE Network, the Royal Belgian Football Association (RBFA), the Fundacja dla Wolności, the Scottish Football Association (SFA), the Fundación del Fútbol Profesional (FFP), and the ESSCA School of Management. All partners have used these two days to express their views, and they have shown a great determination to carry out the project. 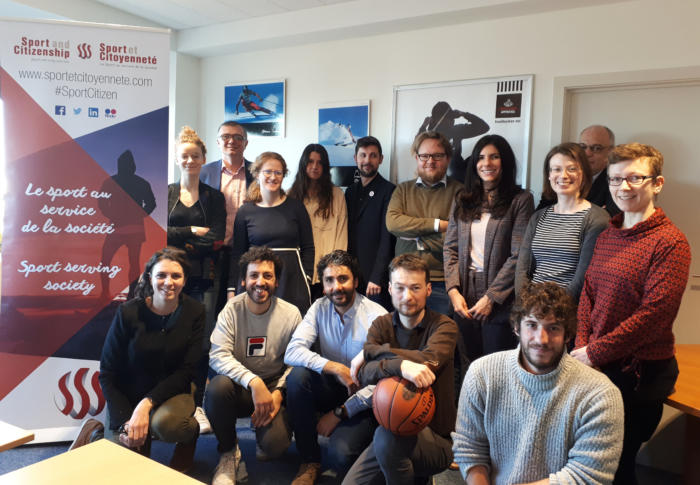 Having been selected following the 2018 Erasmus + call for proposals conducted by the European Commission, the FIRE project aims to be an effective response to the ambitions of the sport’s chapter included in the Erasmus+ 2014-2020 Programme, particularly when it comes to using sport as a tool for social inclusion. Sport and Citizenship and its partners are firmly convinced that sport has a key role to play in order to address the migration challenges that Europe is currently facing.

The main objective of the project is to support grassroots football organization and foster cross-sector partnerships between every sector involved by creating a network for mutual enrichment of participants. One of the major initiatives will be the implementation of Local Activation Pilots to adapt international good practices to local context to meet the needs and expectations of migrants in different countries with divers backgrounds. The kick-off meeting was particularly fruitful by providing a framework for the Mapping of the existing initiatives around Europe, the Mapping being one of the first steps of the project (January-August 2019).

National conferences will also be held regularly during the project in the countries of the partners involved so everyone could share good practices coming from volunteers, coaches or representants of football organizations. These conferences will be an opportunity to present the work in progress and to identify the expectations of the parties concerned.

Indeed, the local actors will be at the core of the project: the project will lead to the creation of a Massive open online course (MOOC) open to the public free of charge. Everyone will be able to follow a formation on how to integrate refugees in a local football structure: the MOOC will provide examples of good practices and testimonies from local actors implementing actions.

The FIRE Project falls within the scope of numerous projects led by Sport and Citizenship these last years. In 2015, the think tank undertook a thorough reflection on the role of sport as a tool for social inclusion of migrants. This resulted in the organization of events related to the topic, such as the reflection day in Nantes in October 2017 to integrate migrants through sports.

Regarding the FIRE project, it will mobilize all partners for the next 24 months until the end of 2020.