Accueil » How can we fight against corruption in sport in the EU and beyond ?
categories:

How can we fight against corruption in sport in the EU and beyond ?

On 9 December, to mark the International Anti-Corruption day, Sport and Citizenship participated in a webinar co-organised by UNODC and the European Parliament’s Sports Team on how to safeguard sport from corruption. This was a great opportunity to discuss challenges and opportunities in this field with a panel of various stakeholders, including members of the European Parliament, the European Commission, UNODC, Italian G20 Presidency, and IOC.

The fight against corruption in sport is a key priority for the EU and its member states. Because corruption thrives in times of crisis, the panellists stressed the importance of having this discussion in the context of the ongoing COVID-19 pandemic. As recovery can only be achieved with integrity, the key message of the webinar was captured by the motto “recovery with integrity”.

Although corruption has been an issue in the sport sector for a long time, crime in sport has risen notably and is assumed to have intensified in the past five years. This large-scale corruption has overwhelmed good governance and structures that are currently in place. MEP Viola von Cramon-Taubadel highlighted a shift from illegal doping to more severe criminal activities such as match fixing, bribery, and money laundering. 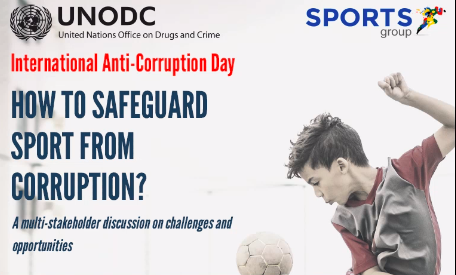 The area of sport has a lot of money involved, and criminal organisations have identified it as a weak domain with a high potential for criminal activities. Importantly, this does not only concern international sporting bodies but also small-scale grassroot structures. The lack of oversight in the sector makes the risk for fraud and corruption high. MEP Daniel Freund suggested that more could be done in terms of regulation, in particular when public money is involved. Although EU laws on money laundering have improved, some member states are slow to implement them, which underlines the tension between theory and practice.

Ronan O’Laoire, UNODC Crime Prevention and Criminal Justice Officer, identified three main avenues of progress to tackle corruption in sport at the EU and international level. First, to strengthen cooperation and partnerships. Indeed, corruption is a global problem which needs a multilateral response involving various stakeholders. Second, to raise more awareness about corruption and threats in sport. According to Paolo Bertaccini, Advisor for Sport Integrity at the Italian G20 Presidency, the absence of awareness and will results in a lack of capacity to fight corruption in sport. Third, to strengthen legal framework and law enforcement. In fact, there is evidence from some countries that legal penalties reduce levels of match fixing. Panellists mentioned additional points such as the need for more transparency, impartial boards, and the protection of whistle blowers.

Sport and Citizenship understands the fight against corruption as a major European issue, and dedicated a journal issue to the subject back in 2012.