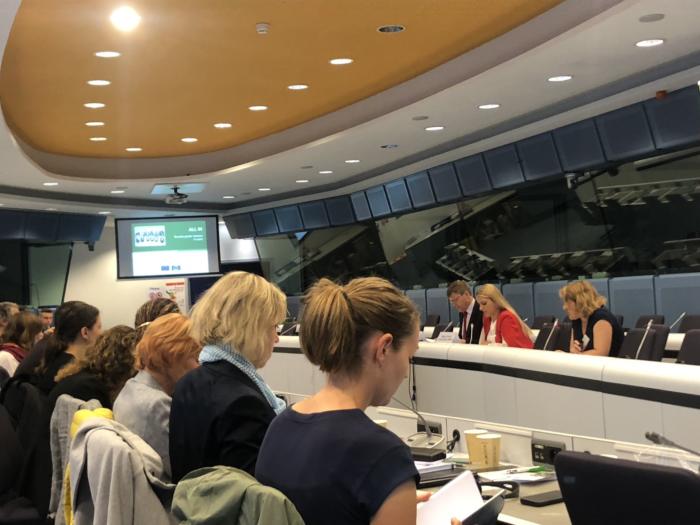 On 10th September in Brussels, the Council of Europe Enlarged Partial Agreement on Sport (EPAS) and the European Commission held the final event of the “ALL IN: Towards gender balance in sport” project.

The project intended to strengthen the evidence-base for gender equality, said Marija Crnkovic, Member of the bureau of EPAS and Gender Quality Rapporteur for the Council of Europe in her opening remarks. Making policies more sensitive to gender issues has become vital in the field of sport. Studies have indeed repeatedly shown that low representation of women in sport governing bodies leads to fewer women participation in sport in general.

This joint project by EPAS and the European Commission’s Sport Unit was allowed by a bilateral cooperation between the two institutions thanks to the Sport Chapter of the Erasmus+ programme. Despite a consolidated cooperation since 2015 and many positive developments, quite a lot remains to be achieved, deplored Yves Le Lostecque, Director of the Sport Unit at the European Commission.

Clotilde Talleu, Senior project manager at EPAS, emphasized that the need for collecting data to inform policy has been well-established: it is a key step towards gender mainstreaming, it allows to monitor progress and track weak points as well as comparisons between countries and sports. Finally, it contributes to raising awareness.

The data collected is broken down in 6 strategic fields: leadership, coaching, participation, gender-based violence, media/communication and polices on gender quality and sport. 18 countries participated in the exercise, with the same set of 3 target groups for all: Ministries/Governments departments responsible for sport, National Olympic Committees and National Federations of Olympic sport. National coordinators were trained and appointed in each participating country to lead the data collection campaign.

Kari Fasting, Professor Emerita at the Norwegian School of Sport led the data analysis and presented participants with a set of results. Among some interesting learning are the following:

All results will soon be available on the “ALL IN” project website. Country leaflets will be available as well as one analytical report. It’s interesting to note here that raw data will be accessible for all. Another interesting innovation is the online dashboard, which recaps all data and allows for comparisons between countries and sports in an interactive fashion. The tool intends to be a one-stop shop for all data with regard to gender quality in sport.