Accueil » Organisation of sport in the member states of the EU
categories:

Organisation of sport in the member states of the EU 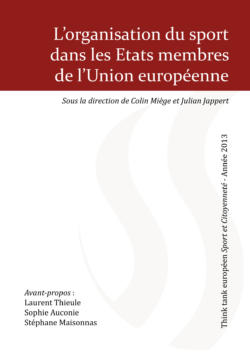 Sport and Citizenship, in partnership with Audencia Business School, publishes an overview of the organization of sport in the Member States of the European Union. A comprehensive comparative study in the form of plug-countries, containing key information on the sport, the legislative framework, sports policy, the major players and the financing of sport in each country studied.

Under the direction of Colin Miege and Julian Jappert

Available in French only

The Lisbon Treaty gives the EU a new skill: to actively participate in the promotion of physical activity and sport with a view firstly to improve the health and well-being of European citizens, but also strengthen the role that sport can play in social cohesion and education at European level. Sport is now presented as belonging to the European dimension. If these traits common to several European sports models seem intelligible, understanding power relations and their distribution in the sport in the Member States falls prima facie obstacle course. This is with a view to contribute to the knowledge of the modes of organization and governance of sport in Europe that the idea of a panorama appeared.

Consider all dimensions for comparison

In performing comparisons, two criteria are classically considered. That the degree of government intervention in sports business first. Then, one relating to the structuring of the sports movement (consolidated or non-consolidated). Each Member State shall determine the objectives of its sports policy based on national priorities and the political and legal traditions play great in the distribution of powers and the role given to the sports movement. Also, if the political dimension, seen in its organizational angle is of first character, to dwell on the cultural and social dimensions are also relevant. It should in fact, in the exercise of comparison and categorization, to consider the citizens’ lifestyle. Sports policies can influence behaviour, but they also respond to the expectations expressed by the public that the different actors of sports sector must meet.