Accueil » PACTE: The tone for the next three years has been set
categories:

Having been selected following the 2017 Erasmus + call for proposals, the PACTE project was set in motion mid-January (15-16) 2018 upon the kick-off meeting which took place at the House of Sport in Brussels (BEL). The eight project partners: TAFISA, ICSSPE, EUPEA, EFCS, ANCI, ECF, the Baltic Region Healthy Cities Association, and the City of Liverpool; blending new and familiar faces, came together to review the project’s immediate and final objectives, and fine-tune the most efficient ways of achieving the latter. Each partner organisation has earned broad recognition for themselves, thus legitimising the consortium’s ambitions, all the while applying transversal and cross-sector collaboration- keys to implementing sustainable change that they advocate passionately. 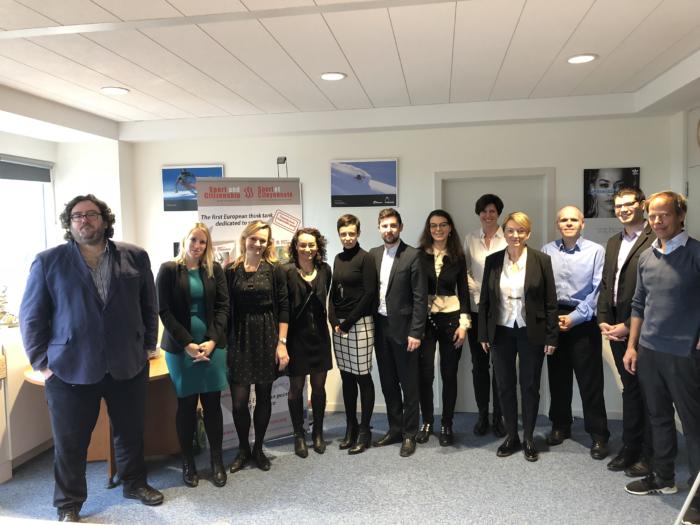 PASS to PACTE- the continuity

Promoting Active Cities Throughout Europe is a direct follow-up to the PASS project, which ended a little over a month ago. To focus on the current state of physical activity levels across Europe, PASS combined ready-existing research with its own investigations- upon which evidence-based recommendations were recently published. The research phase also enabled to produce a clear compilation putting forth physical activity’s overarching benefits and the burdensome costs of sedentarism.

One of the most alarming discoveries was undoubtedly that over three-quarters of local decision-makers are oblivious to the extent of inactivity (210 million Europeans) and the direct costs it triggers (at least € 80 billion of yearly medical care throughout the EU28). To top this, over 70% of Europeans currently live in cities, thus making urban areas the beating heart of Europe-yet a sick heart at the very best. Granted such insight, PASS designed urban areas and cities as key to tackling the inactivity pandemic, enhanced by the fact that investigations into local physical activity levels, practices and policies remain virtually inexistent to this day. Ironically, local level administration and policies directly affect citizens, and do so in a much more effective way than national or European ones do. Their relevance and quality is therefore paramount.

Given all the right facts, the untapped potential of cities and towns is painfully obvious.

Promoting Active Cities Throughout Europe… but how?

In this way, the PASS findings paved the founding stones upon which the PACTE project was conceptualised.

The project aims to be a catalyst for raising awareness, for improving physical activity access, planning and promotion, at the municipal level across the continent. To achieve its goals, PACTE has been broken down into three main steps. The first consists in the dissemination of a representative European-wide survey of municipalities’ physical activity policies and practices. A first quantitative survey seeks to gather widespread response in order to establish a base to the mapping, and will offer the possibility of receiving an additional second survey. It will be narrative-based and will provide further qualitative insight- these participating cities and towns will be granted the opportunity of becoming pilot cities in the next stage. In a nutshell, the survey analysis not only allows to define averages and best practices, but to pinpoint common needs in sight of promoting physical activity.

Then, a matrix will be elaborated thereby providing two outcomes – a self-evaluation process for municipalities accompanied by tailored recommendations for continuous improvement.  Based on the survey findings, the research and the outcomes of the five topical workshops set to take place over the course of the next two years, the matrix seeks to standout by providing decision-makers with easy step-by-step solutions resulting in measureable benefits. TAFISA and the City of Liverpool will organise the Active Leisure workshop, EUPEA the Active Education one, ECF Active Transport, and EFCS the Active Workplace. Once the matrix is completed, a pool of cities having filled in the second survey will be selected and supported to trial the matrix, that will likely lead to some adjustments. Hereafter, the matrix will be adapted as an online platform of resources, available to all.

Finally, a communication campaign targeting European municipalities shall be developed and delivered in order to further support and promote physical activity policies. The same trial cities will be offered the possibility to continue their collaboration by acting as ambassadors to promote project deliverables and messages.

Contributing to the common good’s future

The philosophy of PACTE hasn’t been wisped out of thin air, it leans on already existing successful initiatives by the likes of ACES Europe or WHO’s Healthy Cities. As an EU recognised initiative, ACES awards yearly recognition labels- European Capital, City, Community and Town of Sport. WHO’s Healthy Cities Network supports cities acknowledging the necessity for cross-sector collaboration towards health-enhancing policies to benefit their citizens. PACTE project partner, the City of Liverpool is in itself an exceptional example of evolution, as it went from possessing one of Britain’s five worst health figures in 2005, to presently featuring in the top five- and aiming to become England’s most active city by 2021!

In 2016 the EU Urban Agenda was established to improve the environment of tomorrow’s cities, notably by multi-level governance cooperation. The Urban Agenda is balanced on three main pillars: Smart cities, Green cities, and Inclusive cities. The ultimate long-term, and ambitious, goal of the PACTE project is for the necessity of Active Cities to reach such recognition, both in private and public life, and for it to be integrated as the fourth and missing pillar of the Urban Agenda, thus consolidating the balance.