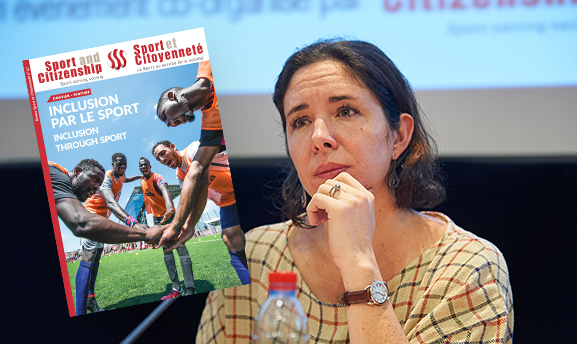 Gaëlle Sempé, Lecturer in STAPS, University of Rennes 2, Member of the VIPS laboratory

Member of the scientific committee of Sport and Citizenship

A relatively recent innovation, the use of sport in the prison setting is changing. Originally seen as a way of filling time, it now takes various forms and is seen more in the light of social reintegration. However, the lack of hindsight when looking at these schemes and certain persistent constraints make it difficult to assess their impact on prisoners.

On the historical scale in the treatment of prisoners, sport was only introduced relatively recently in European prisons and it was given a disciplinary and occupational role, usually as a real addition to the pain of incarceration. Until the end of the 20th century, for the prisoner, doing a physical activity meant, at best, serving his time and, at worst, bearing the unbearable (Courtine, 1980). In turn, although it was justified by a more humanitarian philosophy and approach to detention, for the prison administrators these activities were mainly seen as a way of making the prisoner body more docile (Foucault, 1975) with a calming effect on prison spaces thus making them easier to manage (Gallant et al. 2015). The prisoners’ spontaneous adoption of these recreational activities, which were badly supervised-funded-structured, was enough for the prison administration to declare their benefits to the public. These benefits existed in certain circumstances and for some prisoners, but they were seen to be very slight and unevenly spread among the population when the different social reports and the socialisation process through sport in the establishment were analysed in detail and empirically. This is clear from the difficulty faced by women in accessing these activities which were largely organised in line with the dominant historical model of sport – male-oriented and hetero. Far from being inclusive[1], the sporting activities, which were mainly provided for men and insufficiently resourced, were reduced to very limited form and content, at the expense of the original educational aims expressed in the first official texts[2]: one session a week on average, in makeshift spaces in the prison, with little choice of sports which were traditionally seen as masculine, in line with a popular body image (football and bodybuilding), under the supervision of a prison guard (in the best of cases, trained as a sport instructor by the prison service).

For nearly two decades now there has been a change in sport policy towards a growing awareness of the difficulties of using sport in this form as a real tool for reintegrating prisoners and as a way of individualising their sentence. The prison authorities seem to be giving a new direction to the development of sport, through agreements with sport federations inviting sports instructors from outside to come into prisons[3], by diversifying, increasing and opening up the sports approaches, disciplines and projects, and by renovating or constructing dedicated sports grounds in prisons. The place for doing sport (Sempé, 2016) is becoming more structured, more complex and more divers in two major directions: the vision of sport and the vision of the sentence. The different measures proposed vary between on the one hand a leisure/occupation/supervision logic and a performance/structure/regulation logic, and on the other hand a notion of incarceration centred on managing the detention and a logic of opening up towards preparing for reintegration. There are more and more socio-sporting projects and programmes aimed at people who are gradually being recognised not just as criminals, but as people with a certain vulnerability or social disaffiliation, and special needs associated as much with their social condition as with their health.

“Vision of sport, vision of the sentence”

However, in spite if this change in prison sport policies in favour of sport with an educational and social objective, sociology studies call for a measure of caution. First of all, not all detainees have access to these socio-sporting programmes. Then, the short time span, the variety and the bottom-up logic of these schemes makes the identification and perpetuation of any positive social impacts on prisoners’ situations and careers more complicated. Finally, the realities and constraints of prison conditions, be they material, human, or political, lead many establishments to continue with the dominant historical model of doing sport in prison – a model which has been shown scientifically to have a very doubtful outcome in terms of reintegration.

[1] The idea of inclusion was first used in schools concerning the problem of disability at school, then extended to other sectors linked to education, and marked a real paradigm shift in education. Contrary to integration in Durkheim’s sense, it assumes that the institution has the capacity to adapt to the needs of the individual, and not the inverse. Educational institutions that follow this path become susceptible to introspection and carefully evaluate their actions. Penitentiary systems, however, are “orphan” institutions and scientific writings have long denounced their lack of progress (Lascoumes, 2006) even when faced with the liveliest and repeated criticisms that have been addressed to them for nearly five decades