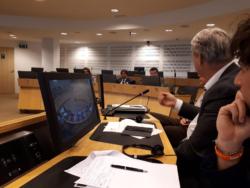 The European Committee of the Regions (CoR) is preparing an own-initiative opinion on Mainstreaming sport into the EU agenda post-2020. A first draft will be ready by 22 May, the opinion will then be presented and discussed during the 19th meeting of the SEDEC Commission of the CoR, on 25 June in Logroño, Spain. The adoption is scheduled for the plenary of the CoR on 8, 9 or 10 October. On 27 April, a stakeholder consultation meeting has been organised by the rapporteur, Roberto Pella (IT/EPP). Sport and Citizenship has been selected among the panel of experts to bring its expertise on the topic as a contribution to the debate.

The rapporteur introduced the meeting by stating how important it is to invest in sport at the European level. Sport has the power to solve a lot of issues that Europe is facing today and will have to cope with in the future, going from health issues to social inclusion. As the recent Eurobarometer on Sport shows, there is a gradual negative trend in the physical activity of the European citizens. Almost half of them never exercise or play sport. The least active citizens are the individuals with lower education levels and/or greater economic difficulties.

Research carried by Sport and Citizenship shows similar worrying numbers. Physical inactivity has reached epidemic proportions in the EU, representing costs of at least 80 billion euros per year. Even more worrying is the gap between physical activities and cities, as roughly 75% of local decision makers are not aware of the above crisis. Our think tank has just launched a European survey as part of our EU-funded PACTE project. This study will explore the relationship between physical activity, sport and cities in Europe. We fear that our data will confirm the negative trend.

Despite initiatives like the European Week of Sport and the Erasmus+ programme, physical activity isn’t evolving well in Europe. The conclusions of the Eurobarometer are that more must be done. An “Erasmus+++” is necessary, with a greater dimension, according to the rapporteur. The stakeholders commented that, although these instruments are very important, we need to focus on structural investments, invest in sport and in sport infrastructure. By 2050, 70% of the European population will be living in cities. Therefore, we need to transform these cities into open-air gyms. They agreed to conclude that physical activity would follow as a result of these investments in infrastructure.

The sport sector represents more than 2% of the European Union’s GDP, it accounts for 7.3 million jobs, representing 3.5% of the total employment in Europe. That is similar to other sectors that enjoy important structural funds. The rapporteur therefore suggests adding the sport sector in the European Social Fund (ESF).

The key themes of the CoR opinion are the following:

The stakeholders suggested adding tourism as a fifth key theme of the opinion. Major sport events have as a consequence the visit of fans as tourists in the hosting cities. It is therefore a very important aspect of sport today. The rapporteur will reflect on that proposal and will also consider the possibility of adding tourism within the economic category.

Sport and Citizenship argued that concerted effort and a transversal approach are necessary, including aspects related to transport, education and public health. Thus, sport should benefit from more space in the EU-agenda post-2020. We advocate for the addition of Active Cities as a fourth pillar of the EU urban agenda. Our PACTE project can serve as a laboratory to test and improve Active City “interventions”.

Roberto Pella explained how he wanted this opinion to be the result of teamwork between all stakeholders and not a political battle among them and with the European institutions. He asked the stakeholders to send their contributions soon. These should be as concise as possible in order to have a very concrete opinion. Once the opinion will be adopted in October 2018, the rapporteur will continue to assure its follow up.