Accueil » The Augmented Gymnasium: PE at the heart of learning by doing
categories:

The Augmented Gymnasium: PE at the heart of learning by doing 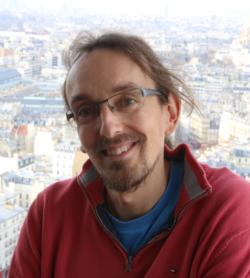 The Augmented Gymnasium is a cooperative, fun system for getting moving in all learning contexts.

We conceived the Augmented Gymnasium as a result of our conviction that learning could be improved by mixing disciplines. We want to promote the process of learning by doing, learning through movement. Our Maker Lab is a tangible example of this. It involves observing how a place for sport can become a place for science and learning, by using the possibilities available in new technologies. The principle of the Augmented Gymnasium consists of projecting an environment on the ground and at 360°, while following the movements of the participants in real time.

Actually, classic virtual reality, where the individual wears a visual helmet, isolates users from the world, and, what is more, they are stationary. We hope to get them moving, to allow them to move and run by giving the illusion of being in a virtual space but without being handicapped by a complex technical system. Presence and movements can be detected within this space.

In this way we create totally new physical and sporting activities. For example, the participants can find themselves inside a video game but they use their bodies: They can throw virtual balls at each other, or jump, move around, and also use their reflexes; in other words, they use the whole range of their physical and cognitive capacity. Totally new games are created. The fun aspect is important: they can go jogging pursued by monsters, catching soap bubbles…. The advantage is that they interact with other people.

From the point of view of sport, disciplines are redefined in an augmented way in order to improve training and performance. Elements which do not really exist can be added: targets, virtual opponents in a race, or the chance to relive a sporting performance that has already taken place.

For us the most interesting aspect is the implication for teaching and learning, with total immersion in the content: for example, a period in history (ancient Rome, the stadium at Olympus), maps in geography, the human body, and so on. The image and sound universe creates a strong immersive experience. These elements prove the feasibility of the concept.

The Augmented Gymnasium is not aimed at high level performance in sport. It is a weapon against inactivity and a tool for enjoyable multidisciplinary learning, through games involving cooperation. It is also possible to get young people to programme the technical systems themselves. At the CRI, the “Savanturiers”, who learn through research, programme their own activities: one class can explain them to another class, or organise sports contests between classes, and so on. The scheme is designed to be used in schools in disadvantaged areas.

The Augmented Gymnasium sees itself as a shared project, because the programmes are an open source: we hope to promote learning through research and shared research. It is about exploring uses, rather than the technology itself. In any case, our prototypes use the digital world to change the relationship between individuals and sport. The Augmented Gymnasium is a challenge to eSports and opens up reflection on augmented physical activity. The sports of the future do not yet exist. Perhaps virtual paintballing will be an Olympic event in 30 years’ time!