Accueil » “What makes a club great is not the media coverage. It is the people around us that count.”
categories:

“What makes a club great is not the media coverage. It is the people around us that count.”

Fodé is not my real name, but I want to tell you the story of my life. It has brought me from Guinea to the Kraainem Football Club.

I played my first matches in the streets of Conakry. For most young people in Guinea the only training they get is street football. Of course, we all dreamt of playing for a world-famous club. I liked learning, too. My family didn’t have enough money to pay for private schools, and it was impossible to get proper teaching in classes with as many as 100 pupils. In the streets where police and interracial violence, health risks and food insecurity are common, there are not many paths for a youngster in poverty that don’t lead to delinquency, drugs or sometimes even death. My uncle did everything he could so that I could get out of this situation. When legal routes for emigration to Europe failed, the people-smuggling networks came into play. They convinced him that I would arrive speedily in Europe, without any danger. This was in April. I was 22. What madness!

I nearly lost my life on the inflatable boat which didn’t seem to have been designed to support the weight of the 43 people on board. We were 19 hours crossing the Mediterranean, bailing until we were exhausted in an attempt to keep the vessel afloat, with water coming in everywhere. I thought I was going to die until the Spanish coastguards saved out lives. I have a message for the youngsters dreaming of making the crossing: don’t believe the seductive, reassuring speeches from the traffickers or what you see on social media. Don’t try to come here like that – it’s suicide. 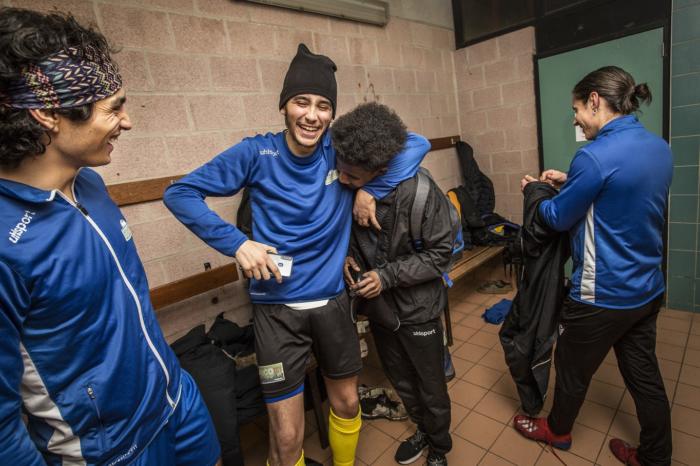 “Belonging to a family”

I reached Brussels in June, alone and lost. The Fedasil accommodation centre which took me in had posters inviting young refugees and asylum seekers to come and play football at the Kraainem Football Club. I was surprised that it was so easy to join. Benjamin, who is in charge of the refugee programme in the club, came to pick us up that morning. When we arrived, for the first time in my life, I stepped on to a real football pitch. The feeling it gave me was so special that I still can’t explain it. That was the day I met Sandra, who ran the bar. She believed in me and introduced me to Laurent, the club president, and after a few try-outs I got a place in the senior team. The club even gave me my kit and Victor, my captain, gave me my boots. As for Myriam, the lessons to teach us about Belgian culture were very useful. All these people helped me with the integration process: sport, and also asking for asylum, finding lodgings and work. They also gave me much more: the feeling of belonging to a family.

The Kraainem Football Club may be a small club in sporting terms. It plays at amateur level in the regional championship. Yet when I realise what the members, all of them volunteers, have done for me, I tell myself that I am lucky enough to play in a great club.

Testimony available in Sport and Citizenship’s journal n°51 – Sport and refugees; conclusions of the FIRE project