Accueil » Women and Sport: One Win Leads to Another
categories:

Women and Sport: One Win Leads to Another 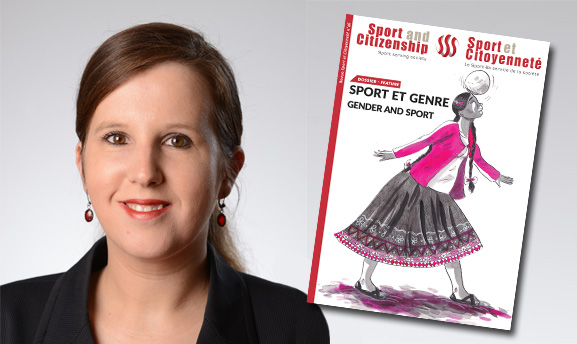 In May 2019, a few days before the launch of the Women’s Football World Cup in France, the Brazilian footballer Marta Vieira da Silva became UN Women Goodwill Ambassador. As a leading player, Marta won the Best FIFA Women’s Player award. In her speech at the UN she talked about the way in which sport had empowered her as a little girl: a little girl who was not destined to be a champion, but who has shown patience and passion in overcoming obstacles all through her life.

Marta’s words are a perfect illustration of the magic of sport for women. Although some people may try to commoditise it or see it as just an insignificant break in leisure time or to counteract boredom, sport actually reveals itself to be a powerful tool for transforming the lives of women and girls throughout the world.

Yet history has not encouraged this view. There were no female competitors in the first modern Olympic Games in 1896. The Games founder, Pierre de Coubertin, even claimed that including women in the competition would be “impractical, uninteresting, unaesthetic and incorrect”. They were only allowed to participate for the first time in 1900. We had to wait over a hundred years, until 2012, before they were allowed to do boxing, the latest Olympic discipline to include women. Nowadays, although there is still a big majority of men amongst athletes and officials, women are gaining ground in every discipline.

Apart from the women champions who are vital as role-models for inspiring the maximum number of people, women and girls all through the world use sport participation as a means to break gender stereotyping. Women are hampered by the idea that they are physically limited and not fitted for performances that have traditionally been seen as classic examples of virility. That is why, in Mexico, UN Women, working with other bodies including the Mexican Institute for Youth, supported the HeForShe tournament in eight of the country’s universities. This time of concentration and enjoyment served to promote the place of women in sport and brought together positive men and women around the female competitors. In Egypt, where gender stereotyping is general, a new project was developed: an American football team made up entirely of women, the SheWolves, was formed in the Dokki and Mohandeseen quarters in Cairo in 2016. They played the first women’s American football match in Africa and won the league championship in December 2016. There was a lot of criticism at first, as the coach Ziad Gaafar Mohammed explains: “People in the community were saying it’s not going to work out for women to play American football. They’re traditional. People nowadays often have stereotypes that women deserve to just stay at home and do the cooking and washing. They’re not used to see women succeed in all fields like men. But actually, these women conquered American football.”

One of the virtues of sport is that it can overturn the ancestral patterns of thinking that limit the possibilities open to women. It can also forge links in circumstances of deprivation or crisis. In this way it is an important tool for integration for women and girls in times of war. That is why, in Jordan, UN Women created football tournaments to speed up the integration of Syrian refugees into the local community. It is easier to make meaningful contact with other people carried along by the excitement of sport, rather than in everyday life, where people can remain unyielding. Getting to know another person makes it possible to appreciate their real qualities. Sport shows what people are like.

Sport is also a catalyst for economic empowerment, since it provides opportunities and the courage to seize them. The “One Win Leads to Another” programme, run jointly by UN Women, the International Olympic Committee, Women Win and the Brazilian ONG Empodera, helps Brazilian girls and young mothers to find financial independence by giving them weekly job training sessions and sporting activities. A specially adapted version of the programme has been created, funded by the Swedish Postcode Foundation, to respond to the specific needs of young mothers, with childcare facilities available on site. A lot of the participants have appreciated the chance to talk provided by these sessions. Simply being with other women, sharing similar experiences and encouraging one another are acts of caring which open doors to the future. The women are stronger together! Through sport, they are able to develop their leadership skills and become winners: all the qualities that they will need to overcome the challenges in their working career. And it works: most of the 850 girls who took part in the pilot phase of the programme from 2015 to 2018 have experienced significant changes in their lives. For example, Raphaela Barbosa Lacerda who gained qualifications through the programme in 2016 has recently been hired by an international cosmetics company. She says that “Taking part in the programme gave me the maturity to face my problems, the strength to express my ideas and the courage to pursue my dreams”. Lacerda is glad to be able to give back a bit of what she received: she is a regular volunteer in her community, where she organises meetings for teenage girls, to talk to them about empowerment for girls. The next phase of the programme, from 2018 to 2020, will be concentrating on expanding and diversifying the partnerships as well as creating a network dedicated to gender equality and sport. Grouping together structures with shared strategies, indicators, tools and systems will make it possible to set up a knowledge centre promoting equality between men and women in Brazil. This will be first in this country, which can be copied all over the world.

These are all experiences, programmes and examples that prove the power of sport, if that was still necessary. The United Nations Sustainable Development Goal number 5 on gender equality leans on the creativity of sport and its capacity to bring together women from all horizons for sustainable results. Women’s sport needs to be made increasingly visible since it still suffers from very poor media coverage[1], women need to be supported in doing all sports and men should be invited to support the movement to magnify its impact. In rings and arenas, on pitches, tatamis and fields and courts, women are making sparks that must be kept burning. They are winning and they are enjoying that. They are as free and enthusiastic as any other player. But for women, this is a right which they have had to fight for, to share and to defend to ensure that this healthy opening up of sports grounds can advance increasingly quickly.

[1] According to the Tucker Centre, women’s sports receive only 4% of all sport media coverage