Raphaëlle Tervel, gold-medallist in handball in 2003, was head coach of the women’s handball club ESBF Besançon until June 2021. Anne Tatu is associate professor of EPS and doctor of sociology. Together, they bring us a reflection on the place of women in professions linked to sport, from the point of view of the sociologist and the coach.

« IT IS POSSIBLE TO BE A MOTHERAND A TOP-LEVEL ATHLETE ! »

AT : At ESBF, you and your assistant Sandrine Mariot formed the only pair of female coaches in the women’s handball league (LFH). So, we are still talking about positions and jobs for men, even in the context of women’s sport. Are women less qualified for these jobs, or less motivated, or is there some internal resistance?
RT : During my last season, we were three female head coaches in the LFH, a record. So things are changing. The main reason why women do not take on the commitment lies in the job itself. It doesn’t leave much free time; it is not compatible with personal life or a family. Oddly enough, this isn’t a problem for men who are husbands, fathers and coaches

AT : You point out an implicit obstacle: the burden of conciliation, of finding a compromise between the demands of the job and of family life. This is “naturally” the responsibility of the wife/mother. Given that, there are three possibilities for a woman who wants a career, particularly in professions which are traditionally male: first, being released from the role of mother once the children are independent (it is as if the woman’s career had to wait until her role as a mother had become secondary). To avoid this, as a second option, a woman can choose independence by staying single. The last choice is social homogamy in the couple, or, in other words, a partner in the same professional sphere.
RT : It’s obvious that we don’t see women with small children in these posts. In any case, if they do risk it, they are exposed to a lot of negative comments that have nothing to do with their competence! In her work “Du Sexisme dans le Sport” (Sexism in Sport), Béatrice Barbusse talks about the harassment suffered by women. They are constantly reminded of their role as mothers and made to feel guilty, through remarks such as: “and who’s looking after the kids while she swans about on the bench?”

AT : These obstacles are fundamental and typical of a sexist sport sector. They reflect a society based on a gender-based share of social roles. This leads to a process of disqualification of women as professionals and often shuts them into junior positions, in the shadow of men. On the other hand, women who do hold important posts in sport derive their legitimacy from a former career as an athlete.
RT : That’s right. I played for 10 years at ESBF (including in a European Cup), then I played in Spain, Norway and in Hungary at Gyor, where we won the Champion’s League twice. At the same time, I was in the French national team for 15 years, and we took part in 4 Olympics and were World Champions in 2003. I had a long and rewarding career, which I wanted to pass on to others, by qualifying as coach. I didn’t have any problem being recognised – it was the club directors who asked for my services! I also think my education was an important factor. My parents never stopped me doing anything. If I wanted to do something, I must go for it and do what it took to succeed. I was able to develop my enjoyment of multiple experiences, high points and ambition !

AT : That’s crucial! In the gender conditioning process behind constructing the identity of little girls, it is intimacy and care that characterise femininity; boys are brought up to be outgoing and enjoy risk-taking. The result of this is that little girls grow into women with a tendency to self-limitation and a feeling of incompetence, not to say imposture.
RT : When I arrived at ESBF as coach, that is what I felt. The lack of “balls” and ambition among the players, and also the team managers! There wasn’t a winning culture. That was what I wanted to bring to the players and the club.
AT : You were specially qualified to get that message across as a former champion, and you could provide the role model which is so often lacking.
RT : The models are already changing though. How many of our women handball players, even in the French national team, are already mothers ? They are dusting off the image of motherhood! I’ll go further: these role models are also important for little boys, so that they can see women doing extraordinary things and no longer think that only men can do things, and so that they respect girls and see them as equals. 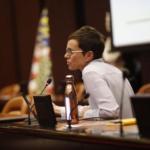 AT : Moving gender frontiers implies revising the models offered to boys and girls. To do this, the message needs to be coherent. For example, in its latest advertisement with Serena Williams, Nike focuses on the ability of sportswomen to get back to the same level after having a baby. At the same time, they are renegotiating a reduction in Allyson Félix’s pay package after her return to sport after the birth of her child. This implies a superficial image, rather than real changes in perceptions and behaviour.
RT : The same is true for sport federations. They have a role to play in ending the differential treatment of male and female players and athletes. It is the same sport ! Policies for increasing the number of women are not always very coherent. The handball federation has been setting a good example in this area for a long time, and look at the results on the court! The women’s and the men’s teams both won gold at the Olympics !

AT : We also need to get rid of taboos about feminine forms of words. All the while we think of the masculine form of the word as “neuter”, we are reinforcing the idea of the dominance of the traditional, male holders of posts, and the incompetence of female newcomers. For example, the term “coaches” is even more symptomatic, because it seems to imply someone lightweight, even less suitable for the job.

RT : If the use of these terms is banned because they once had a pejorative sense, that doesn’t solve the problem. Young people do not know that meaning, so if they hear “entraineuse”, they will think of a woman who trains a sports team, and the meaning will change.

AT : One last word about the ESBF club. In 2019, a very relevant project on working for equal opportunities in sport (“Les Engagées”) was unanimously adopted by the board of directors. Today, all that remains of it is the logo and the name of a team. What went wrong ?
RT : The project didn’t take, because it was too avant-garde for the directors ! Even the (male) politicians in charge of sport in local authorities were against it at the time. Since then, though, other clubs have not hesitated in adopting the idea. That is all the better for women’s sport, but I am sorry it didn’t work for my club and city.
AT : I completely agree. This goes to illustrate what I call the male gerontocracy, which has an aversion to change because it is afraid of disappearing along with its legacy, if it gave up its place to young people, women and people with ability. The “Established” are faced with “Outsiders”, to use the sociologist H. S. Becker’s image, which leads one to think that in certain sectors and contexts, change can only come about through revolution