Accueil » ” The view and the teaching skills of women will enrich sport management and coaching “
categories:

« I FIRMLY BELIEVE IN THE POWER OF EXAMPLE »

A lot of state policies aimed at encouraging women’s participation in sport and the social and professional inclusion of women through sport have been rolled out over the last few years. The “Des Métiers Pluri’Elles” project fits firmly into this trend, by helping a number of women to access jobs in sport, all over France. In the opinion of Roxana Maracineanu, French Minister for Sport, there is still progress to be made in this area by sport. 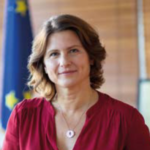 The “Des Métiers Pluri’Elles” project makes it easier for women to work in sport management. Schemes for guiding and supporting young women towards jobs in sport have been implemented, and regional conferences help stakeholders in this area to make contact. How do you see this project and this subject ?

RM : The place of women in sport is one of my major preoccupations, whether it is a question of encouraging women to do sport, in every discipline, including those that have long been considered as reserved for men, or of access to management and coaching roles. Sport is clearly behind in this area and needs to catch up. By reinforcing the place of women in coaching and decision-making posts, more girls and women will be encouraged to join clubs. I firmly believe in the power of example. To see a woman referee in an international match between men, to see a woman president or technical director of a sport federation, or to see women coaching in clubs will show others that it is possible.

Within the framework of the “Des Métiers Pluri’Elles”, the French Cycling Federation is training girls to run “Savoir Rouler à Vélo” sessions, one of the essential skills promised by your Ministry. What do you think of the roll-out of this scheme ?

RM : I am very pleased to see how the federations are getting behind our “Savoir-Rouler à Vélo” (how to ride a bike) programme, since it has become a basic sporting skill taught at school, like swimming. I am working to ensure that federations like cycling, cycle-tourism and triathlon get involved in “Savoir-Rouler”. They possess the legitimacy, the expertise and the trainers. Training women instructors is obviously very important. Apart from the question of rights, I think that the view and teaching skills of women will enrich sport management and coaching.

Promoting gender equality in sport is multi-faceted. Participation in sport needs to be promoted, and also access for women to posts of responsibility, and jobs in sport and the media. What is being done in these areas, and do you have any plans for the coming months ?

RM : It is so vital that we have included the principle of full parity in federation governing bodies in the proposed law to democratise sport in France, which, I hope, will be voted before the end of this parliament. However, we have also put the more general notion of gender equality in the new generation of contracts which will link the Sports Ministry and the federations. We are on the path to progress and hope that this will flow from the national level to the clubs.

« TOWARDS FULL PARITY IN THE GOVERNING BODIES OF SPORTS FEDERATIONS »

Jobs linked to sport management and coaching are suffering from the present health crisis. What schemes are being backed by the government to boost jobs in sport ?
RM : In 2015, the government created the Sésame scheme to help school dropouts with no qualifications towards jobs in sport and entertainment. The number of young people who go on to get a job is very high. That is why we wanted to give more impetus to Sésame, by doubling the number of young people on the scheme, with the help of France Relance. By 2022, 6,000 young people will have been trained, and, of course, we are careful to respect diversity in selecting the candidates. As well as Sésame, France Relance gives us the funding for up to 7,500 supported jobs in sport associations, including numerous women.

You yourself are a former athlete, world champion and Olympic silver medallist in swimming, and now Minister. Your career is inspiring for girls. Do you think role models are important in sport ?
RM : They are clearly essential. We do not always realise how much. As a child, I admired the Romanian gymnast Nadia Comaneci, and later, the swimmer Krisztina Egerszegi. But you do not need to be a world champion to inspire other people. Every day I meet women volunteers or instructors who, through their example, trace a pathway for other women.

France will hold the presidency of the Council of the EU for the first half of 2022. What subjects do you hope to bring forward during this six months presidency ?
RM : My priorities fall within the framework of the EU Work Plan for Sport 2021-2024. They mainly concern transforming sport practices and the way they are organised in the light of climate change. We intend to deal with a subject which is dear to me: life-long awareness of sustainable development, starting in early childhood. France will continue the work being done by the Slovenian presidency on strengthening the protection of the founding principles of sport in Europe and defending the “European Sport model”: solidarity between professional and amateur sport, protecting the integrity of athletes, competitions based on sporting merit, and protecting the training of athletes and national teams.

« WORK ON SUSTAINABLE DEVELOPMENT DURING THE FRENCH PRESIDENCY OF THE EU »