Accueil » Thinking about the legacy : a challenge and a necessity
categories:

Thinking about the legacy : a challenge and a necessity

Any organiser of a major sporting event nowadays is obliged to think about the legacy. But what does this mean? How to go beyond entrenched positions and analyse objectively the positive or negative impact of a sporting event on the region and the stakeholders?

Discussions about sports events have been full of the expression “legacy” for several years. It is part of the vision of sport going beyond its competitive aspect and making reference to schemes run by various bodies (such as UNESCO) in the field of development and solidarity through sport. The term was often used in considering impact in economic questions, but has only more recently been used to talk about the social and cultural aspects. Since the attribution of the Paris 2024 Olympic and Paralympic Games, various stakeholders in France have used it without first engaging in an in-depth reflection on its truth, its operational perspectives, and its possible meaning.

However, researchers are studying this issue. A lot has been published in English, and several studies into the subject are being carried out by research teams such as the VIPS2 laboratory.

To go beyond entrenched positions and envisage an effective legacy, several things need to be considered. Five of these define avenues for reflection determining forms of action and directions for research.

“Mobilising outside the sport sector”

To sum up, the legacy challenges how the role of sporting events is understood and conceived. For a long time, they were seen as a sign of the strength of a nation or as a setting for great exploits, and were designed to take place successfully. Very few have integrated their effect on the environment. When legacy became a factor, their legitimacy became vital.

Although some organisers are aware of their social responsibility, this is not always the case. One of the challenges of the next few years will probably be to look again at the effects of sporting events in order to make them instruments of change lasting longer than the actual event. To do this, it will be essential to include the legacy in their organisation and to follow it up, so as to give new meaning to these events. The change is surely under way, and the researchers need to be on board. 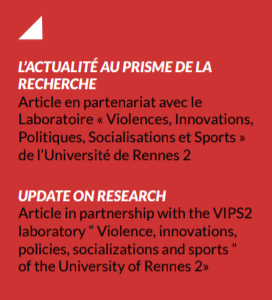