“Putting women’s sport in the spotlight”

A billion people will be following the Women’s Football World Cup this summer. Erwan Le Prévost, Director of the Organising Committee for this World Cup, talks about the main issues. 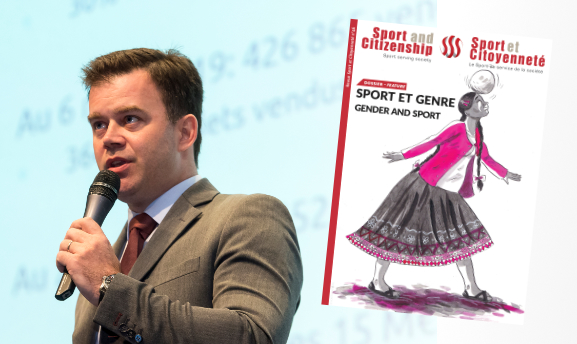 What does hosting an event such as the Women’s Football World Cup mean in terms of organisation?

ELP: What you need to bear in mind is that we are hosting a Football World Cup, not a Women’s World Cup. It must meet the same standards as the World Cup in Russia last year. To give a few figures, it involves 24 teams, 552 players and 52 matches in the space of one month. Today, the Local Organising Committee (LOC) is almost complete. We are a team of 250 helpers, with over a hundred of them covering the nine host cities. In addition, there are the 2,500 volunteers who will be working alongside us throughout the competition, and the volunteers recruited by the cities themselves.

There is a lot of enthusiasm for the event. The final is already sold out. Can you feel the same interest from the economic partners and the media?

ELP: We agreed with FIFA that we would have 6 National Supporters (editor’s note: a level of sponsorship open to domestically owned companies whose principal place of business and principal operations are situated in the host country). We reached this objective last month with Orange, who joined us along with Arkema, Crédit Agricole, EDF, Proman and the SNCF. We had no doubt at all about the interest that would be generated by the competition with our economic partners and we are glad to see that we were not mistaken. As for the media, this interview reflects the state of affairs. Since the launch in September 2017 at the Musée de l’Homme we have felt the rising enthusiasm. This became even more marked after the U-20 World Cup in Brittany in August 2018. Since then, as the sport season is marked by different highlights, the interest of the media has definitely increased. A day does not go by without seeing articles or reports on the World Cup or women’s football in general, not just in France, but internationally.

“A turning point for the Federation”

How do you think we can capitalise on this enthusiasm to help the sustained development of football and women’s sport for tomorrow?

ELP: In the space of one year, people in France will have been able to see three major women’s competitions: the U-20 World Cup, the European Handball Championship and now the 2019 World Cup. Needless to say, the success of these events and their media coverage have put women’s sport in the spotlight. For the French Football Federation, this World Cup marks a turning point. It reflects the efforts that have been made to get more women into football since Noël Le Graët took over as President in 2011. The FFF is very committed to working with us, particularly through its Leagues and Districts, to ensure that this event becomes a showcase for developing football and women’s sport.