Accueil » “We are only starting to unleash the full potential of the women’s game”
categories:

The FIFA Women’s World Cup France 2019™ will kick off in less than a month’s time. Ahead of this marquee event, we spoke with the three women at the helm of the female game at football’s world governing body, FIFA: Fatma Samoura, Secretary General, Joyce Cook, Chief Member Associations Officer and Sarai Bareman, Chief Women’s Football Officer. They stressed the progress that has been made, outlined the institution’s global strategy, predicted a prosperous future for women’s football and highlighted its far-reaching impact off the pitch. 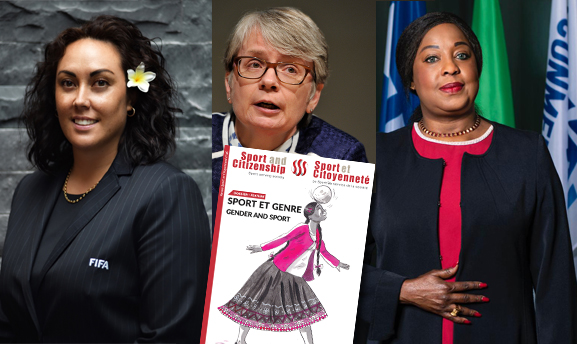 Ms Samoura, you are the first woman to serve as FIFA’s Secretary General, which is tantamount to being world football’s CEO. Ahead of the flagship competition in women’s football, we would like to know: what is the state of play in the female game?

Fatma Samoura (FS): Giving a concise overview of the state of women’s football is a tall order, as there are so many dimensions: the game per se, financial aspects, media coverage, fans, societal issues, grassroots work, general framework conditions and so on. However, even though we have already made a lot of progress, there is still a long way to go for the women’s game. It is an absolute top priority at FIFA and we stressed that last year with the publication of our global strategy for women’s football, which covers all the bases and lays a foundation for further systematic development. The upcoming tournament is already the eighth edition of the FIFA Women’s World Cup™. There has been immense development in a relatively short space of time – and we can definitely look forward to further broad and sustainable long-term development in the future.

2018 is pretty late for the sport’s world governing body to have launched its first-ever global strategy for the women’s game, isn’t it?

Sarai Bareman (SB): On the surface, it might seem that way, but let’s not forget that FIFA’s efforts in support of the women’s game started decades ago. In addition, before the first FIFA Women’s World Cup in 1991, there had already been strategies in place for the development and promotion of women’s football, of course – they just weren’t published. In contrast to today, however, women’s football was not prioritised at that time; rather, it all too often remained an afterthought in the context of world football. The development in the interim has been groundbreaking: the number of players and competitions has increased dramatically, the standard of the game has improved markedly and public interest is catching up – we expect over one billion people to watch the upcoming tournament. That is an increase of more than a third compared to the last edition, four years ago. And I am not exaggerating when I say that we are only starting to unleash the full potential of the women’s game.

In a nutshell, what we want to achieve with the implementation of the Women’s Football Strategy is to develop and grow the women’s game on and off the pitch, showcase the game by improving competitions, broaden the exposure and commercial value, institutionalise women’s football, strive for gender balance and nurture the sport’s positive impact on women and girls. We want to get more girls involved in football earlier, keep more women in the game longer and further leverage the societal benefits of football.

Given the figures you have mentioned, some might be sceptical about your optimism and wonder whether women’s football might have already hit its ceiling.

Joyce Cook (JC): We have already reached several milestones, that is true, and we are proud of that. However, as a matter of fact, there are still vast untapped opportunities and the women’s game’s potential reaches far beyond the sidelines of the pitch. By making football accessible to more girls and women, we support female empowerment and, among other things, contribute to societal cohesion. FIFA has 211 member associations and as of now, only a relatively small number have competitions for girls and women in place – but that is changing. By 2022, all member associations are expected to have a specific women’s football strategy, as well as women on their executive committees, and the FIFA Forward Development Programme 2.0 Regulations strongly incentivise the organisation of national women’s and girls’ competitions. Also, by 2026, the number of female football players worldwide is expected to be around 60 million – double the number we had back in 2016, when we first mentioned this target as part of FIFA 2.0: The Vision for the Future, FIFA’s overall strategic roadmap.

“By making football accessible to more girls and women, we support female empowerment”

It seems to be a demanding task to promote and develop women’s football. Is FIFA well positioned to focus on this emerging field?

FS: It is demanding in certain parts of the world because societal structures, for instance, are not conducive to smooth development of the women’s game. On the other hand, there is huge demand: women and girls all over the world want access to the game. That is a major focus and source of motivation – through football, we can also achieve development goals off the pitch.

In recent years, we strengthened our institution, and when it comes to governance mechanisms, we are now at the forefront in the sports industry. One of the measures taken as part of this process was the establishment of a dedicated Women’s Football Division headed up by Sarai, who brought a lot of valuable experience from the football industry to FIFA. Not only on the pitch but also at FIFA itself, women are on the rise: we already make up roughly 43% of the staff. If you had looked for female chief officers for such an interview at the last Women’s World Cup four years ago, you would not have found even one – now we have more women in leadership positions at FIFA than ever before. Additionally, we have introduced requirements regarding the number of women for our strategic and oversight body, the FIFA Council, and our nine committees. We have incorporated specific women’s football-related elements, some of which Joyce has already referred to, into our central football development programme, FIFA Forward, through which we support our member associations and the confederations financially and with expertise. So, the answer is a clear ‘yes’: we are well prepared to work on the further development of the women’s game.

You mentioned the beneficial impact of women’s football off the pitch. What can football change or contribute in a societal context?

JC: We are convinced that football is a very powerful tool. The game can break down barriers. One example is our new Football for Schools Programme, through which we aim to reach over 700 million girls and boys around the world. We will distribute 11 million footballs through our 211 member associations and will offer a football programme that can be included as part of any school curriculum or as an extracurricular pursuit. We believe that football can teach life skills and thereby contribute to the development, health, education and empowerment of children. For this programme, we have signed innovative agreements with the United Nations Educational, Scientific and Cultural Organization (UNESCO) and the World Food Programme (WFP), and the first pilot projects are just getting up and running. Another example is our work with regard to safeguarding children: FIFA has made this topic one of its priorities and set up a Child Protection and Safeguarding Expert Working Group in 2018, with participants from the football community and international organizations, including the Council of Europe, UNICEF and Safe Sports International. The goal of the working group is to help develop a safeguarding programme to protect girls and boys in football together with our member associations. We have also recently appointed FIFA’s first ever Child Safeguarding Manager and will be launching the FIFA child safeguarding toolkit and training programme for member associations in July this year.

Our member associations also play a key role in bringing women’s football per se to the next level: they know the local circumstances best with tailor-made projects dedicated to girls and women’s football implemented through the Forward programme. We are working very closely with them to ensure that our joint efforts have the greatest impact possible.

Going back to the big event that is around the corner, what do you expect from the upcoming World Cup in terms of legacy?

SB: As we touched on previously, it will be a Women’s World Cup of superlatives in every respect – standard of play, attendances, media coverage, reach and so on. Undoubtedly, this will have an impact and raise awareness around the world. Talking about new heights, compared to the last edition, FIFA has also doubled the prize money for the tournament. We are also very much looking forward to the Women’s Football Convention that will be taking place in Paris on 6 and 7 June, on the eve of the tournament. The goal of that event is to bring together football stakeholders and political leaders from around the globe to use football as a powerful unifying force to bring about positive societal change, fight inequality and empower girls and women worldwide.

FS: ‘Legacy’ is a broad term, but there is one element I would like to emphasise: we are confident that this World Cup will help lay the foundations to change the perception of women’s football and its potential role in society around the world. With the further development of the sport and wider acceptance, there will be a positive snowball effect that will be beneficial to all – not only to girls and women, but to entire societies. And, last but not least, the preparations ahead of this tournament have already had a considerable impact: the momentum generated has resulted in us receiving a record-breaking nine registrations in connection with the bidding process for the next Women’s World Cup in 2023.